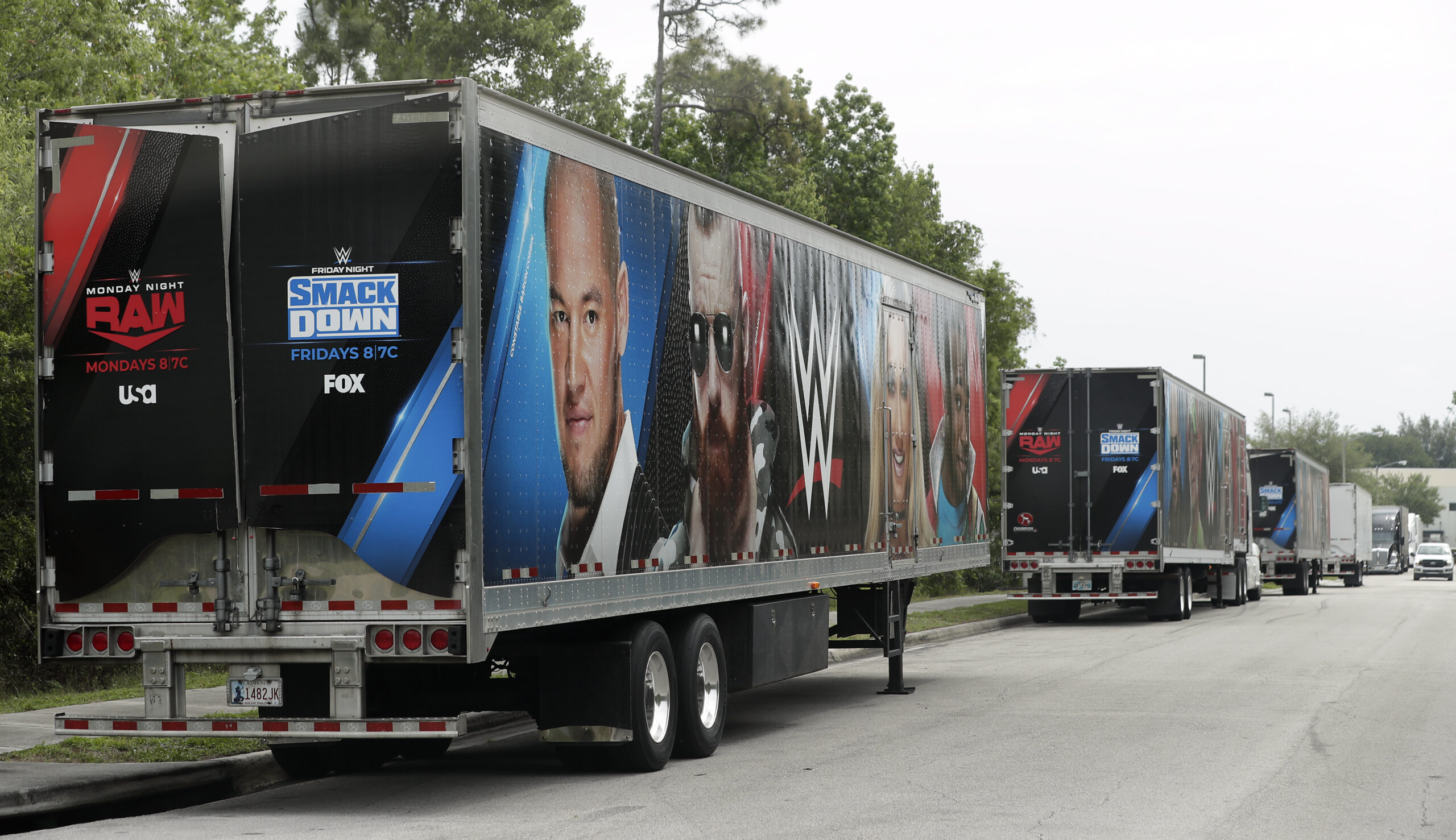 Equipment trailers are lined up at the entrance road to the WWE Performance Center in Orlando, Fla. (AP Photo/John Raoux)

Knowing the sports world will forever be changed and getting fans adjusted to new protocols to attend events will be a key issue for sports organizations going forward, said panelists during a Variety webinar this week — but it has also sped up the innovations that can solidify communication with fans.

During the event “The Future of Sports & Live Events,” panelists discussed those topics and more as the return to live sports continues to gather speed with each day on top of the events that are already being staged.

“The world is being retrained right now,” Los Angeles Rams Chief Operating Officer Kevin Demoff said. “When we first put (metal detector screening) at NFL games, we saw all the complaints that first came with that. Now nobody bats an eye. I think we’ll be at the forefront of the retraining now and people will expect a level of cleanliness to be at a live event. The human connection is more important than ever, but they have to feel safe doing it.”

“We’re hopeful that people will want to return but how do you return?” added WWE Chief Brand Officer Stephanie McMahon. “With all the safety protocols, it’s going to take time to get people comfortable. … I think we’re all in a little bit of wait-and-see pattern what is going to happen. I think people by nature love community and that’s one of the things sports does best.”

Safety for fans and competitors alike will be the overwhelming concern. Mark McCaffrey, partner and U.S. technology media and telecommunications leader of PwC, described it as two buckets: One, getting the ecosystem around players to be safe for competition and two, making sure that fans can safely attend events but still allow them to enjoy food, beverage and merchandise at games.

“There’s no playbook for what we’re going through,” McCaffrey said. “We’re in unchartered territory with no right or wrong answers.”

But he also added “if this had happened 10 years ago, I don’t know what we would have done. The science and innovation to address these really hard problems—we have all the elements to get through this.”

NFL at an Advantage

The Rams and NFL overall had an advantage, Demoff admitted, being in its offseason during the pandemic while other leagues such as the NBA, NHL and MLS have had to suspend seasons and MLB has yet to get underway. As the NFL starts to open up with training camps ahead later in the summer, keeping players healthy will be the center of attention.

“We start training camp in six weeks and you’re talking about 90 players in a facility,” Demoff said. “That’s so much larger than in any other sport. … It is impossible to socially distance on the field. How do we make it safe for our players from the moment they walk back into our facility at the end of July? The next step will be ultimately how do we make it safe for the players.”

The WWE, meanwhile, never stopped having shows — even moving WrestleMania from Tampa Bay, Florida, to its performance center in Orlando, Florida, which has been transformed into a television studio to broadcast seven hours of content each week. With no fans in attendance other than developmental talent, McMahon said protocols have included deep cleaning every night in the facility and daily temperature checks for everybody that goes into the facility.

Through all of the broadcasts and events held in the center, McMahon said two people have tested positive for COVID-19 — one person in late March that has since recovered and a developmental talent performer who tested positive on Monday, forcing production to shut down for the moment.

Looking to the future, McMahon said holding events “is not going to go back to normal. Certain elements might — I believe we will have fans in stadiums and arenas at a time to be determined. There will be protocols, there will be a playbook of sorts for how we’ve all handled this. We’re going to look at what we did, what worked well, what didn’t work well and document everything. … I do think the innovation is critical.”

Innovation not only in broadcasting and holding events but taking fans behind the curtain has also increased at warp speed. Demoff said for the Rams, instead of having players spend hours of time driving to connect with 500 people at an in-person event, they can save that time and reach more people by having fan events held virtually.

Lisa Joseph Metelus, CAA’s co-head of basketball marketing and servicing, said her firm had one of the best group of draft-eligible signees ever.

Metelus said for several of CAA’s clients, taking control of their own content has led to greater exposure: “When we went into the first phase of COVID-19 there was a lot of boredom and getting on Instagram live and sharing content because there was nothing else to do,” she said. “As time went on, you saw guys decide to use their platform and make their voices heard whether it’s in business or any other issues they want to discuss.”

“Authenticity matters most in this equation and when you can give people a real look inside the lives and thoughts of these athletes who are role models and inspiring personalities, when you shine a light and give them opportunity to engage with fans directly, you don’t go back from that,” said David Katz, Fox Sports’ executive vice president and head of digital.