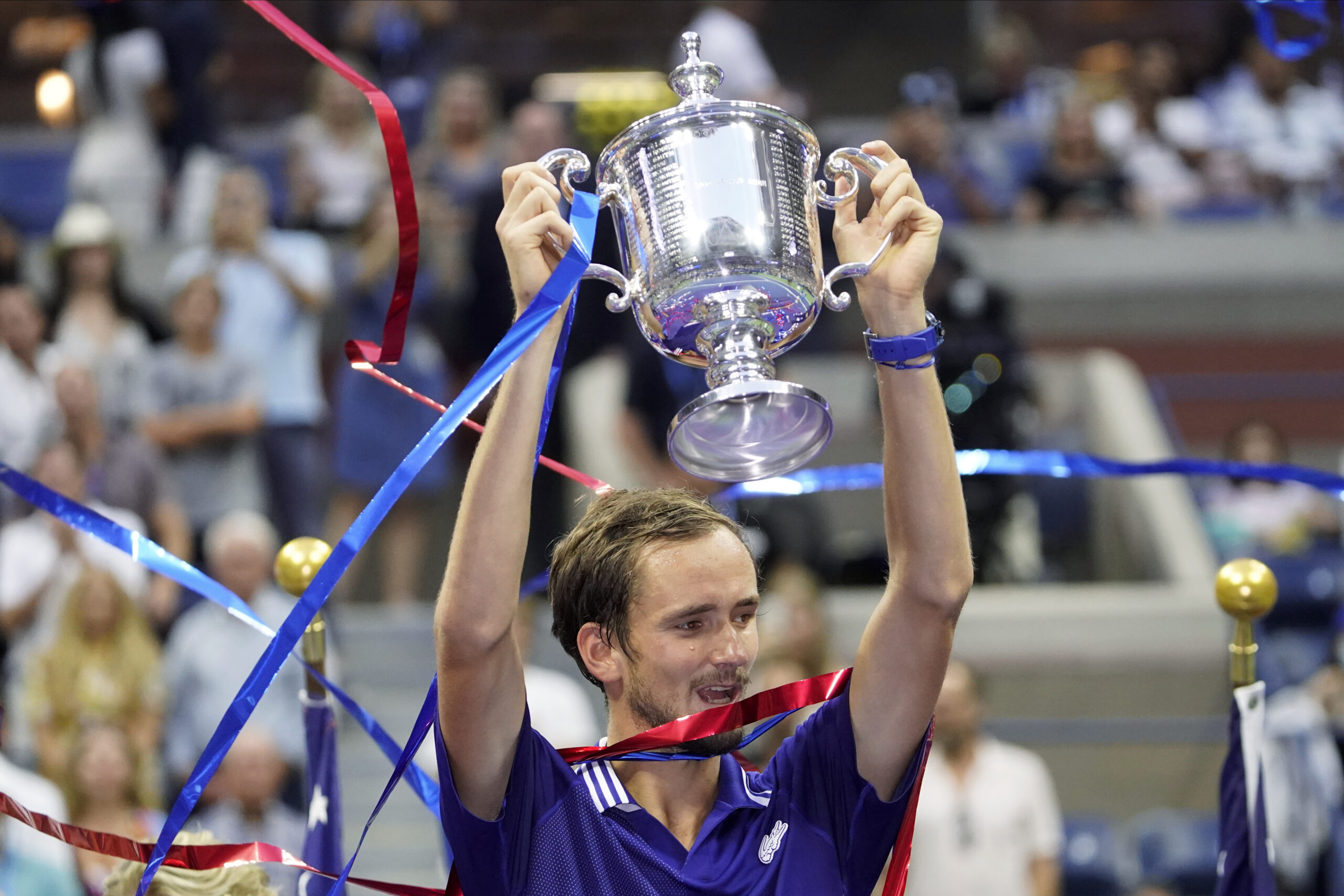 Daniil Medvedev of Russia will be allowed to defend his championship at the U.S. Open this summer in New York, the U.S. Tennis Association announced. (AP Photo/John Minchillo)

The United States Tennis Association has announced a humanitarian aid plan to benefit the Ukraine under the ‘Tennis Plays for Peace’ program, with hopes of raising $2 million during the U.S. Open with events and activations starting August 24.

The launch event will be an exhibition on August 24, which is Ukraine Independence Day. The event will feature a lineup of some of the biggest names in the game including Rafael Nadal, Coco Gauff, John McEnroe, Carlos Alcarez, Leylah Fernandez and many others playing in a series of singles and mixed doubles matches in Louis Armstrong Stadium from 7 to 9 p.m. Proceeds from tickets sold to the event will go to GlobalGiving, the international non-profit identified by Tennis Plays for Peace.

“The U.S. Open is a stage that attracts millions of passionate fans and it is incumbent upon us to help guide this passion to help those who desperately need it,” said USTA Chairman of the Board and President Mike McNulty.  “This is a vitally-important cause and I’m proud of the way in which our sport has rallied together to lend a much-needed hand to our friends in Ukraine.”

The U.S. Open has invited the Ukraine Chorus Dumka of NY to be a part of the 2022 Opening Night Ceremonies. The USTA will work with GlobalGiving to create a unique URL to ensure that anyone interested in supporting Ukraine relief effort will have a direct means to access GlobalGiving’s array of offerings. Also, a text to donate opportunity will be built for U.S. fans and will be promoted on domestic broadcasts, digital platforms and throughout the USTA Billie Jean King National Tennis Center.

The U.S. Open will allow players from Belarus and Russia, including men’s defending champion Daniil Medvedev, to compete at the final Grand Slam of the season despite the ongoing war in the Ukraine. The U.S. Open starts August 29 in New York with players from Russia and Belarus competing under a neutral flag.

The USTA announcement was made weeks ahead of Wimbledon, which banned Russians and Belarussians from competing. Elena Rybakina won the women’s championship representing Kazakhstan, although she grew up in Moscow and still lives there.

Since Russia first attacked Ukraine in February, Russian athletes have been prevented from taking part in many sports, including soccer’s World Cup qualifying playoffs. Russia also was held out of international team events in tennis, the Billie Jean King Cup and Davis Cup. It was the reigning champion in both.

Russia’s invasion of the Ukraine has resulted in widespread reaction throughout the sports world over the past three months, with individuals banned in some cases and teams temporarily barred from others.

• One of the biggest sales of a Premier League club was completed by a group led by Los Angeles Dodgers part-owner Todd Boehly with the group paying $3.1 billion for two-time Champions League winners Chelsea because of sanctions placed on its now-former owner, Roman Abramovich, in the wake of Russia’s invasion of Ukraine. Abramovich bought the club 19 years ago. His tenure included two Champions League titles including last year, a FIFA Club World Cup championship and five Premier League titles. But the Russian oligarch was sanctioned due to links to Russian President Vladimir Putin, forcing the club to operate under a temporary government license that was set to expire at the end of May. Chelsea won 21 trophies under Abramovich after he bought the team in 2003, bringing in a wave of success the club had never previously experienced. His impact on European soccer has been nothing short of revolutionary, ushering in an era of high-priced transfers the likes had never been seen before. In many ways, the amount of money that Abramovich has spent on the club — more than $2 billion in less than two decades — acquiring big-name players with money seemingly as no object ushered in the era of where now clubs are all but owned by countries.

• The International Ice Hockey Federation moved the 2023 World Championships out of Russia. The event was scheduled for May 5–21, 2023, in St. Petersburg. The IIHF said in its statement that it will confirm a new host for the 2023 event during the annual congress in Tampere, Finland, during the final week of the 2022 world championships. Earlier this year the IIHF removed Russia’s hosting rights for all tournaments in 2022. Russia had been set to host the 2023 World Junior Championship as well before it and Belarus were banned in February from international play.

• Several Russian Olympic athletes participated in a rally supporting Putin and the invasion of Ukraine, sparking an international backlash that increased the country’s status as a sporting pariah. Olympic champion swimmer Evgeny Rylov is under investigation for attending the event, the sport’s governing body, FINA, told The Associated Press. Rylov also lost his endorsement deal with Speedo because of his involvement. Russian and Belarusian swimmers were banned from competing at the world championships by FINA, the sport’s governing body which originally planned to allow Russians and Belarusians to compete as “neutral athletes.” Other Olympic medalists in attendance included figure skaters Victoria Sinitsina, Nikita Katsalapov, Evgenia Tarasova and Vladimir Morozov; cross-country skier Alexander Bolshunov and rhythmic gymnastics twin sisters Dina and Arina Averina. Bolshunov won a gold medal at the recent Olympic Winter Games in Beijing, while Tarasova and Morozov won silver in pairs figure skating and Sinitsina and Katsalapov won bronze in ice dancing. Most of the athletes were pictured wearing jackets with a “Z” on the chest. The letter is not part of the Russian alphabet but has become a symbol of support for Russian troops. Russia hosted the Olympic and Paralympic Winter Games in Sochi in 2014 but has been a lightning rod in the Olympic movement because of its repeated drug scandals involving the country’s athletes. Russia recently finished competing in the Olympic Winter Games in Beijing under the guise of the Russian Olympic Committee because of widespread drug scandals involving the country’s athletes dating through the past decade.

• The Court of Arbitration for Sport denied Russia’s appeal against FIFA that froze the men’s national team out of the 2022 World Cup qualifying playoffs. FIFA’s decision is the first ban of a country since 1992, when FIFA and UEFA removed Yugoslavia from its competitions following United Nations sanctions imposed when war broke out in the Balkans. CAS earlier denied Russia’s appeal against UEFA that banned its club teams and its women’s national team from its competitions including the Europa League, in which Spartak Moscow had advanced to the Round of 16, and the Women’s Euro 2022 competition. Spartak’s opponent in the round of 16, German club Leipzig, was given a bye to the quarterfinals. Russian under-21 and youth national teams for men and women were also scheduled to play European Championship qualifying games in the weeks ahead before the appeal was denied.

• Olympic great Sebastian Coe, now the president of World Athletics, said the international sports ban of Russian and Belarusian athletes must remain in place for as long as needed in the wake of Russia’s invasion of the Ukraine. Coe’s stance is noteworthy on multiple levels. As the president of World Athletics, he has a powerful voice within the Olympic and international sports movement, bolstered by his background running the 2012 Olympic and Paralympic Summer Games in London and as an Olympian who won gold medals in the 1,500 meters in both the 1980 and 1984 Games — events that both had large-scale boycotts, led by the U.S. in 1980 and by the Soviet Union in 1984. Track and field had previously been the hardest on Russians following the country’s state-sponsored doping scandal dating to the 2014 Winter Olympics in Sochi. Russians have to be individually vetted in order to compete in international track events. The Russian track federation has been banned since 2015.

• International federations throughout the sports world have continued to take action against Russia in the wake of its invasion of the Ukraine after the International Olympic Committee called for a ban on Russian and Belarussian athletes and officials from events to “protect the integrity of global sports competitions and for the safety of all the participants” while FIFA followed shortly after by banning Russia from a 2022 World Cup qualifying playoff. The International Skating Union said that no athletes from Russia or Belarus would be invited or allowed to participate ahead of this month’s world championships in France, joining decisions to ban Russia by FIFA and the International Ice Hockey Federation from its upcoming events. The International Volleyball Federation also stripped Russia of hosting the men’s world championships. World Athletics also will exclude all athletes and officials from Russia and Belarus “from all World Athletics Series events for the foreseeable future, with immediate effect.”

The world governing body for swimming, FINA, said the World Junior Championships scheduled for August in Kazan, Russia, would be moved to a new host country and the 2014 FINA Order awarded to Putin has been withdrawn. FINA did say “Russian or Belarusian nationals, be it as individuals or teams, should be accepted only as neutral athletes or neutral teams,” at its events. The International Ski Federation has also decided to allow Russians to compete, but the Norwegian Ski Federation said Tuesday it would block Russians from upcoming World Cup events in its country.

The IOC said it acted “with a heavy heart” but the impact of war on Ukrainian sports was front of mind. Russia breached the Olympic Truce by invading Ukraine on Thursday, four days after the closing ceremony of the Winter Games in Beijing. It was the third Russian breach of the Olympic Truce in 14 years. Russia invaded Georgia during the 2008 Summer Olympics in Beijing and annexed Crimea shortly after the 2014 Winter Olympics in Sochi.