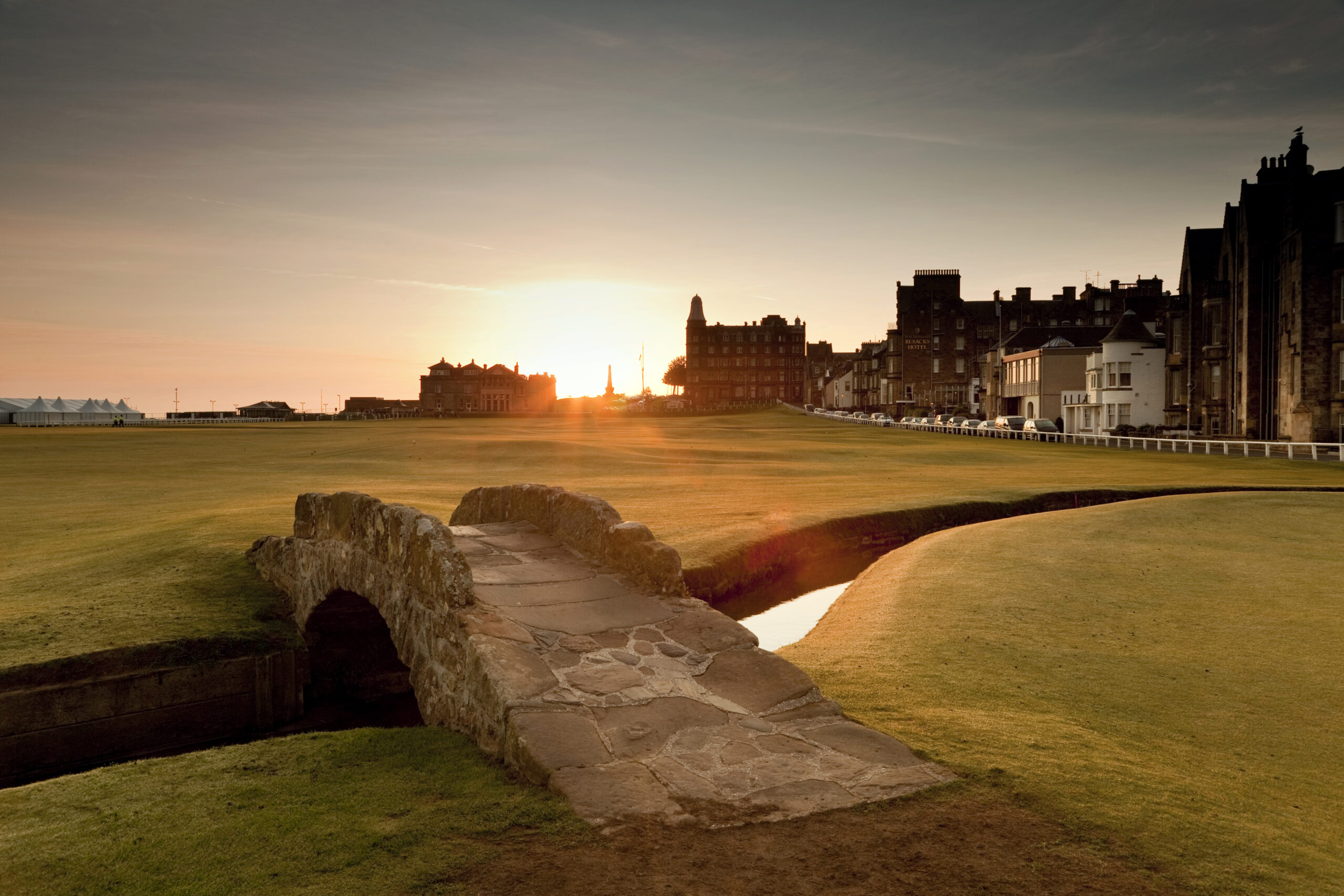 The Swilcan Bridge on the 18th Fairway of the Old Course in St. Andrews is one of the iconic spots in the sport of golf. Photo by Paul Tomkins of VisitScotland.

The 150th Open Championship has started on the Old Course at St. Andrews in Fife, Scotland — one of the most famous golf courses in the world.

This will be the 30th time The Open Championship will be contested at the venue, adding further significance to the 2022 version.

Scotland, the birthplace of the game of golf, is prepared to host a celebration fitting of 150 years of The Open Championship. Alan Grant, senior golf manager of VisitScotland, described all of the special facets of the upcoming golf milestone. For more information about golfing in Scotland and booking a trip, visit Golf in Scotland.

What special events/ceremonies are taking place at St. Andrews to commemorate The 150th Open Championship?

Grant: Throughout the Championship week, the significance of The 150th Open will be recognized through a range of activities. The historic staging of golf’s original championship takes place from July 10‐17 and fans attending on Monday, July 11, will be treated to a distinguished field of The Open’s champion golfers, women’s major champions, male and female amateur champions, and golfers with disability champions, as they compete in a four‐hole challenge over the 1st, 2nd, 17th and 18th holes of the famous Old Course. Even prior to the Championship, special events have been held including a stunning Celebration of Light, which witnessed the iconic R&A Clubhouse bathed in a spectacular light and sound project show.

What are the main sponsor activations to commemorate the 150th Open Championship?

Grant: Given the significance of the 150th Open, many of the Championship’s patrons are focusing activation and support of the event on enhancing the message and significance of the historic staging. Rolex are supporting a significant digital and video project to recount the history of the Championship, and HSBC are supporting a UK nationwide tour of the famed Claret Jug. … Scottish whisky producer Loch Lomond Whiskies has created a special single malt edition specifically for the 150th Open.

What activities are taking place from a fan engagement standpoint?

Grant: In recent years, The R&A — the organizers of The Open — have focused on improving the fan experience at the event. For the 2022 staging, several additional grandstands will see thousands of seats located around the course, including the famous 1st hole and 17th and 18th greens. The spectator village will see a dedicated kids play area and giant TV screens, as well as the opportunity to get free golf lessons from PGA Professionals. The Open Camping village also returns, offering ticket holders the chance to camp overnight close to the entrance of the Championship, including a host of activities throughout the evenings.

What is the estimated economic impact that the Open brings to a place like St. Andrews?

Grant: With the 150th Open headlining an unprecedented six weeks of consecutive professional golf tournaments across the men’s and women’s game in Scotland this summer, the impact of staging, hosting, and broadcasting major golf events has never been more important as Scotland continues its recovery from the impact of the global pandemic. A record 290,000 spectators are set to attend the 150th Open at St. Andrews this year, and the economic and media impact of the event is expected to exceed all previous records. In 2015, when American Zach Johnson last won The Open when it was hosted on the Old Course, the economic impact and media value of the event exceeded £150M (approx. $181 million) to the town, region, and country.

What makes golfing in Scotland different than other places in the world? Why should someone book a golfing trip there?

Grant: Scotland is the Home of Golf. From the game’s original beginnings on Leith Links in Edinburgh, to the global, multi‐billion‐dollar business the game has since become, Scotland remains the heart and soul of the game. With over 550 courses, many within easy reach of the main cities and airports, a golf trip to Scotland is unlike any other golf trip as visitors walk the historic fairways of courses throughout Scotland. Whether it is a relatively undiscovered gem in the North, such as Tain Golf Club, or some of the more renowned courses such as the Old Course in St. Andrews or Prestwick Golf Club on Scotland’s West Coast — the original site for The Open Championship — visitors are guaranteed a warm welcome and an experience unmatched anywhere else in the world.