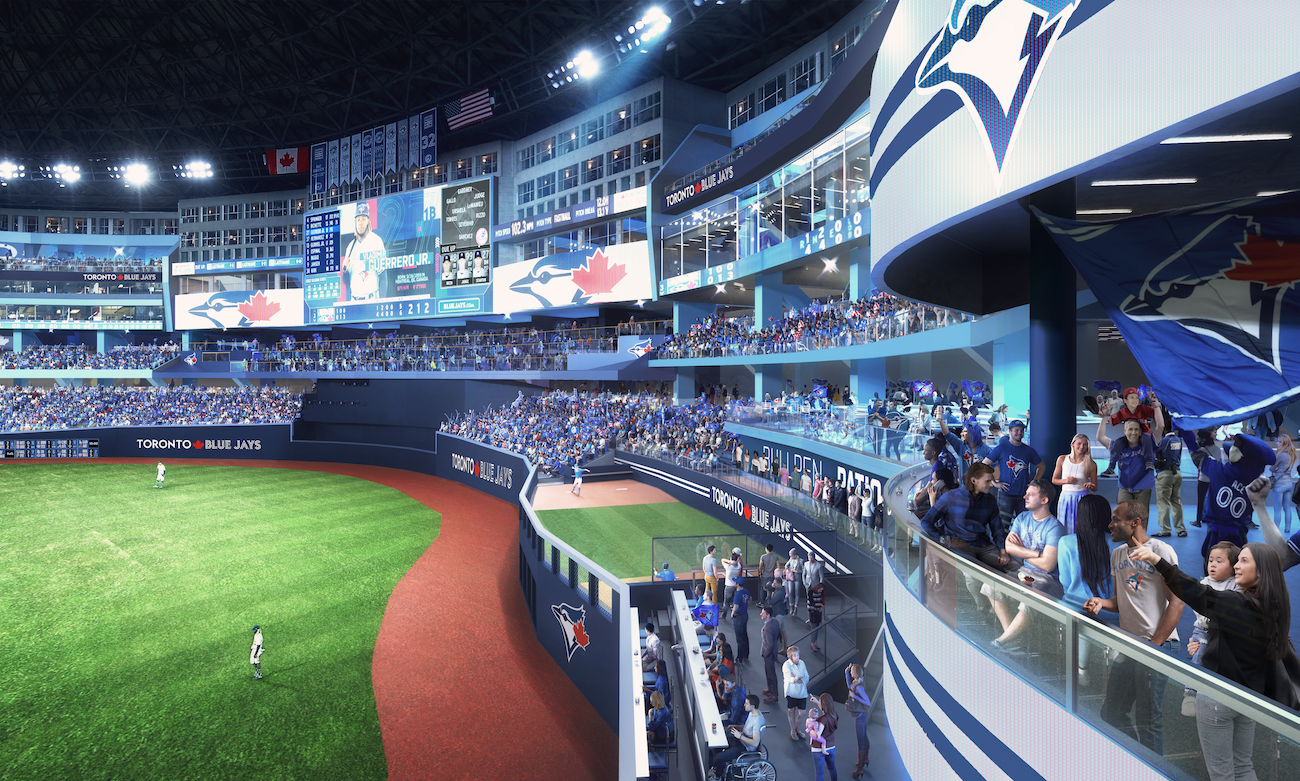 The renovations to Rogers Centre will include new patio and lounge areas in the outfield.

The Toronto Blue Jays are transforming their home with a large project that carries a hefty price tag.

MLB’s lone Canadian team unveiled the first renderings of a multiyear $300 million privately funded renovation that will transform Rogers Centre from a stadium into a ballpark through a series of projects.

“We are committed to building a sustainable championship organization for years to come, and this renovation to Rogers Centre will give new and lifelong Blue Jays fans a ballpark where they can proudly cheer on their team,” said Mark Shapiro, president and CEO, Toronto Blue Jays. “This project would not be possible without the support of Edward Rogers, Tony Staffieri, and our Rogers ownership group, who have demonstrated an unwavering commitment to the Blue Jays, both in fielding the best team to win championships, as well as in the infrastructure needed to create a modern ballpark for our fans and players.”

When Rogers Centre opened in 1989, it was designed to be a multipurpose stadium that could host more than baseball. The facility hasn’t undergone a large-scale renovation in its 33-year history. The scope of this project will address the most important challenges with the current stadium, while also making long-term improvements for future generations of fans.

“This renovation to Rogers Centre will deliver an enhanced ballpark experience for fans of Canada’s team so they can gather to cheer on the Blue Jays and make cherished memories with family and friends, as they have for the last 33 years,” said Edward Rogers, chair of the Toronto Blue Jays and chair of the board, Rogers Communications. “We proudly support the efforts of Mark and the entire Blue Jays leadership team as they embark on this project, and we have the utmost confidence in their ability to build both a winning team on the field and a modern ballpark that meets the evolving needs of our passionate Blue Jays fans.”

A series of projects are phased over the coming two to three off-seasons, focused on the interior of the building. Projects will be completed during the offseason as to not impact baseball activity in-season.

The improvements include the creation of multiple new social spaces with patios, drink rails, bars,\ and viewing platforms. Raised bullpens surrounded by traditional and new bleacher seats, as well as social viewing areas that look into the bullpens to increase fan and player interaction, are also included.

Additionally, new seats and outfield walls will be installed, while the weight rooms and locker rooms will be redone for players.

The Blue Jays are once again working with Populous on architectural design. The organization also included direct fan feedback into the decision-making process.