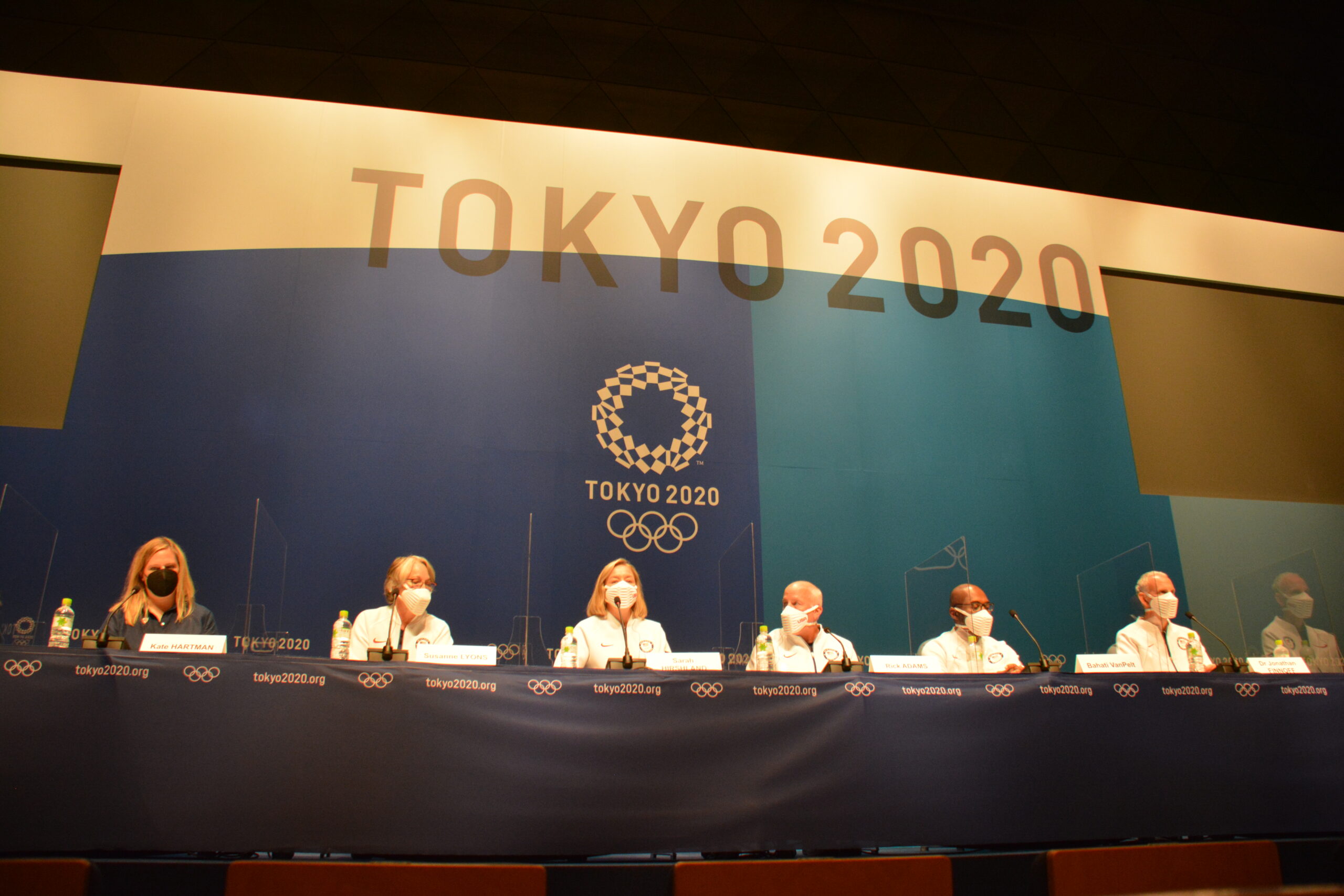 Leaders of the USOPC address the media in Tokyo in advance of the Olympic Summer Games. Photo: Jason Gewirtz

Hours before the Opening Ceremony of the Olympic Summer Games in Tokyo, leaders of the U.S. Olympic and Paralympic Committee said their primary focus was the safety and security of the 613 athletes that will represent Team USA, while acknowledging the extreme logistical hurdles in getting the team to Tokyo and prepared to compete.

USOPC Board Chair Susanne Lyons said the stress in making sure the athletes are safe and the Games don’t become a source of disappointment for the Japanese people has made planning for this Olympics more unusual that others.

“In some ways we’re all amazed and also relieved that here we are on the cusp of the Games,” she said during a press conference. “I think initially when Tokyo won these Games it was a source of great excitement for the Japanese people and it’s sad to say that because of COVID it’s become the source of a great deal of stress. That’s put us all of us in the position of doing everything we can to make sure these Games are safe and as low risk as possible for the Japanese people and of course for the athletes and the people here to support them.”

Team USA athletes for the most part are coming in vaccinated against the virus. Dr. Jonathan Finnoff, the USOPC’s chief medical officer, said 83 percent of the U.S. athlete delegation was vaccinated before the Games, a figure he was pleased with entering the competition.

“When someone asks me should the Games go on, I can say emphatically they should go on.”
—Dr. Jonathan Finnoff, USOPC Chief Medical Officer

But it’s more than athletes who are at the Games. Team USA’s support system for those athletes will be vast in Tokyo. Some 137 medical staff members are in Tokyo as well, including 36 physicians, 48 athletic trainers, 18 physical therapists, 15 chiropractors, 12 massage therapists and two mental health officers.

Finnoff said the COVID countermeasures in place in Tokyo, which include near daily testing for many in the Olympic family as well as mask wearing, social distancing and hand washing that have become commonplace during the pandemic gave him confidence the event can be held safely. “When someone asks me should the Games go on, I can say emphatically they should go on,” he said.

Rick Adams, the USOPC’s director of sport performance, said the team itself was ready to start competing. But he acknowledged the USOPC has braced them that unexpected circumstances may still arise that could affect their training or performance because of an ever-shifting landscape on the ground in the fight against COVID.

“From a sport perspective, we are excited to be here and we’re looking forward to competing on the world’s biggest stage,” he said.

Adams added that the various recent U.S. Olympic Trials, including the larger ones held in June in gymnastics, swimming and track and field, served as test runs both for athletes and support staff for issues such as testing and COVID protocols that put the U.S. team in a good position heading into Tokyo.

“We were learning what we had there on the ground, everything from how do we make sure the flow around the testing itself was done properly, egress and the things you might not always think about,” he said. “We’re very confident that what was put in place during the Trials season and what was put in place since the Trials and obviously what’s happening here is what needs to be done to make health and safety a priority.”

Lost in most of the recent hand-wringing over logistics of the Games has been the Games themselves, which begin in earnest after the Opening Ceremony on Friday night. To that, USOPC CEO Sarah Hirshland said Team USA was of course there to win on the field of play. “Is the U.S. coming here hoping to win a lot of medals? You bet we are,” she said.

She urged those watching at home to embrace the competition ahead, wherever the story line may take the events.

“I would invite the American public but frankly all of those around the world to enjoy these Games and to rest assured we can conduct these Games in a safe and healthy environment,” she said. “We should enjoy the fun and the spirit about what this competition is all about. Let’s enjoy these Games as much as we always would and allow them to inspire and unite us as they should.”