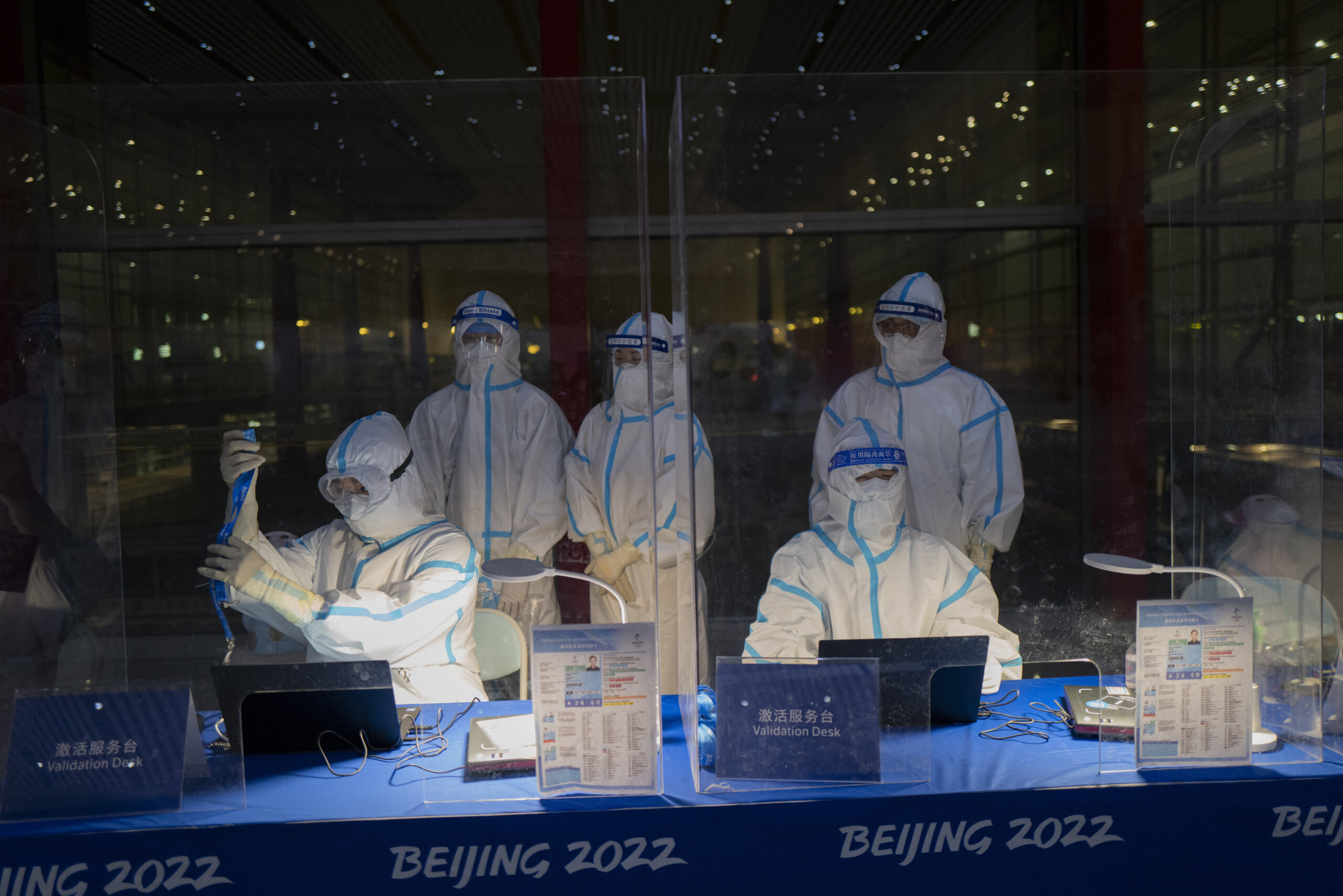 Olympic workers in hazmat suits work at a credential validation desk at the Beijing Capital International Airport ahead of the 2022 Winter Olympics in on January 24, 2022. Athletes and others headed to the Olympics face a multitude of COVID-19 testing hurdles as organizers seek to catch any infections early and keep the virus at bay. (AP Photo/Jae C. Hong, File)

The Beijing 2002 Olympic Villages have officially opened with about 2,900 athletes are expected to arrive in the next week.

The Beijing Olympic Village is located in the Chaoyang district of the city, close to the Olympic Park. It will predominantly house athletes competing in the ice sports at Beijing 2022. In Zhangjiakou, the Olympic Village will accommodate 2,640 athletes and team officials taking part in freestyle skiing, snowboarding, biathlon, ski jumping and cross-country skiing. The third Olympic Village, in Yanqing, will accommodate 1,430 athletes and team officials who will take part in alpine skiing, luge, bobsleigh and skeleton.

After the Games, the Beijing Olympic Village will be turned into apartments for rent or sale, while the Yanqing and Zhangjiakou Olympic Villages will become hotels, apartments and a business cluster to serve the region’s winter sports industry. At each of the villages, a wide range of services are offered including a hair salon, café, bank, post office, general store, merchandise store, telecom store (for SIM cards) and newsstand.

The accomodations are open — but getting there is still a challenge when it comes to making sure you can avoid the omicron variant of COVID-19, given what is at stake for Olympians.

Two-time Olympic champion Mikaela Shiffrin leads the 17-member U.S. ski team while snowboard Chloe Kim is one of the most high-profile American winter sports athletes. Typically, all the Olympians and staffers representing the U.S. Ski & Snowboard Association would gather and leave for a Winter Olympic Games destination together.

This year is no typical Games. Between the strict entry requirements into Beijing and fears over the spread of the omicron variant of COVID-19, extraordinary precautions are being taken to get Olympians into China.

“There are certainly plenty of logistical hurdles,” U.S. Ski & Snowboard President and Chief Executive Officer Sophie Goldschmidt told the SportsTravel Podcast this week. “We’ll have athletes leaving from various locations. Many of them are training and competing in Europe at the moment and probably would come back before heading to an Olympics, but we want to minimize unnecessary travel as much as possible, so they’re going to stay there and jump on flights from Europe straight to Beijing. Others are in the U.S. and will be leaving from various destinations.

“It’s a bit of a jigsaw puzzle,” Goldschmidt described it. “With the protocols and amount of testing you have to do in the days leading up, there’s a lot to juggle and manage. But we’ve got a great team who are on top of every detail. Changes are happening in real time so we just have to stay on top of it.”

The Associated Press reported on the process of getting through COVID testing in Beijing. Photographer Jae Hong described seeing passengers met by workers in white, full-body protective gear. Everyone is tested for COVID-19 at the airport before being transported to their barricaded hotels, the entrances protected by round-the-clock guards.

“I know the only experience of Beijing I’m going to experience is the Beijing I will see out of my bus window and my hotel window,” said Associated Press photo editor Yirmiyan Arthur, who arrived this week. “I’m not really going to experience China, I’m just going to experience the Olympics within the bubble.”
Organizers in Beijing have eased the COVID-19 requirements for participants, which could lead to fewer athletes tripped up by positive tests. The International Olympic Committee said the changes include easing the threshold for being designated positive for COVID-19 from PCR tests and reducing to seven days from 14 days the period for which a person is deemed a close contact.

The changes, which take effect immediately and apply retrospectively, “have been developed in order to further adapt to the reality of the current environment and support the Games participants,” the IOC said in a statement.

The viral load detected in PCR tests has been a source of contention among those in the medical community as to whether a person is still contagious. Shiffrin herself tested positive earlier this season but was cleared to ski eight days later on the World Cup circuit.

“We’ve been managing the process and had very strict protocols that we communicate very regularly to all of our athletes, coaches and staff,” Goldschmidt said. “We’re just reviewing (events) constantly — what are we learning, can we change different protocols, how can we make sure we’re communicating the right way. There’s a challenge that this has been around so long it can be white noise and people think because (omicron is) not so serious, ‘OK you don’t have to take the protocols so seriously.’ It’s just not the case. A positive case is a positive case.”

The Alpine schedule in Beijing starts February 6 with the men’s downhill, followed by the women’s giant slalom on February 7.

Organizers began reporting data on positive COVID-19 tests among Games-related personnel, with 177 confirmed cases found among 3,115 international arrivals from January 4 to January 23, according to Beijing 2022 data released Sunday and Monday.

The first athletes to have publicly been ruled out of the Olympics were revealed on Tuesday as Russian figure skater Mikhail Kolyada after testing positive ahead of traveling to a pre-Olympic training camp. He has been replaced by Evgeni Semenenko on the team; Kolyada was the only member of Russia’s men’s team who had previously competed at the Olympics.

“Several days ago Mikhail Kolyada started feeling unwell,” the federation said. “For all this time the skater has not been training.”

Two-time ski jumping gold medalist Andreas Wellinger will also miss the Games because he tested positive one day before the German team was selected.

“The risk for him and for the team is too high,” team spokesman Ralph Eder said Tuesday.

China mandates 21 days of quarantine for people arriving from abroad but waived that for those coming for the Olympics on condition they test negative for the virus. Those conditions served as a ‘special’ enhancement for athletes to get vaccinated, although multiple delegations including the United States mandated vaccination for athletes and team officials.

One country that did not have a mandate was Switzerland and snowboarder Patrizia Kummer, who won a gold medal at the 2014 Sochi Olympics in the parallel slalom, is almost done finishing her isolation before competing. Kummer declined to discuss her “personal reasons” for refusing a vaccine, telling The Associated Press “I had a bunch of reasons for the vaccine and a bunch of reasons against the vaccine, and in the end, it was like, ‘No, I can’t do it.’”

Kummer is staying in a Holiday Inn in Beijing where food is brought to her door three times a day. She has a stationary bike for exercise and she brought a yoga mat, weights and fitness equipment.

Kummer’s friend, Austrian snowboarder Claudia Riegler, is also unvaccinated. Austria has threatened to leave Riegler off the team if she does not at least get her first shot by Sunday; Austrian news agency APA reported that Riegler does not want to be vaccinated after having contracted the virus over the Christmas period.