Home > Olympic Sports > Even Without Olympics in 2023, IOC Will Stay Busy 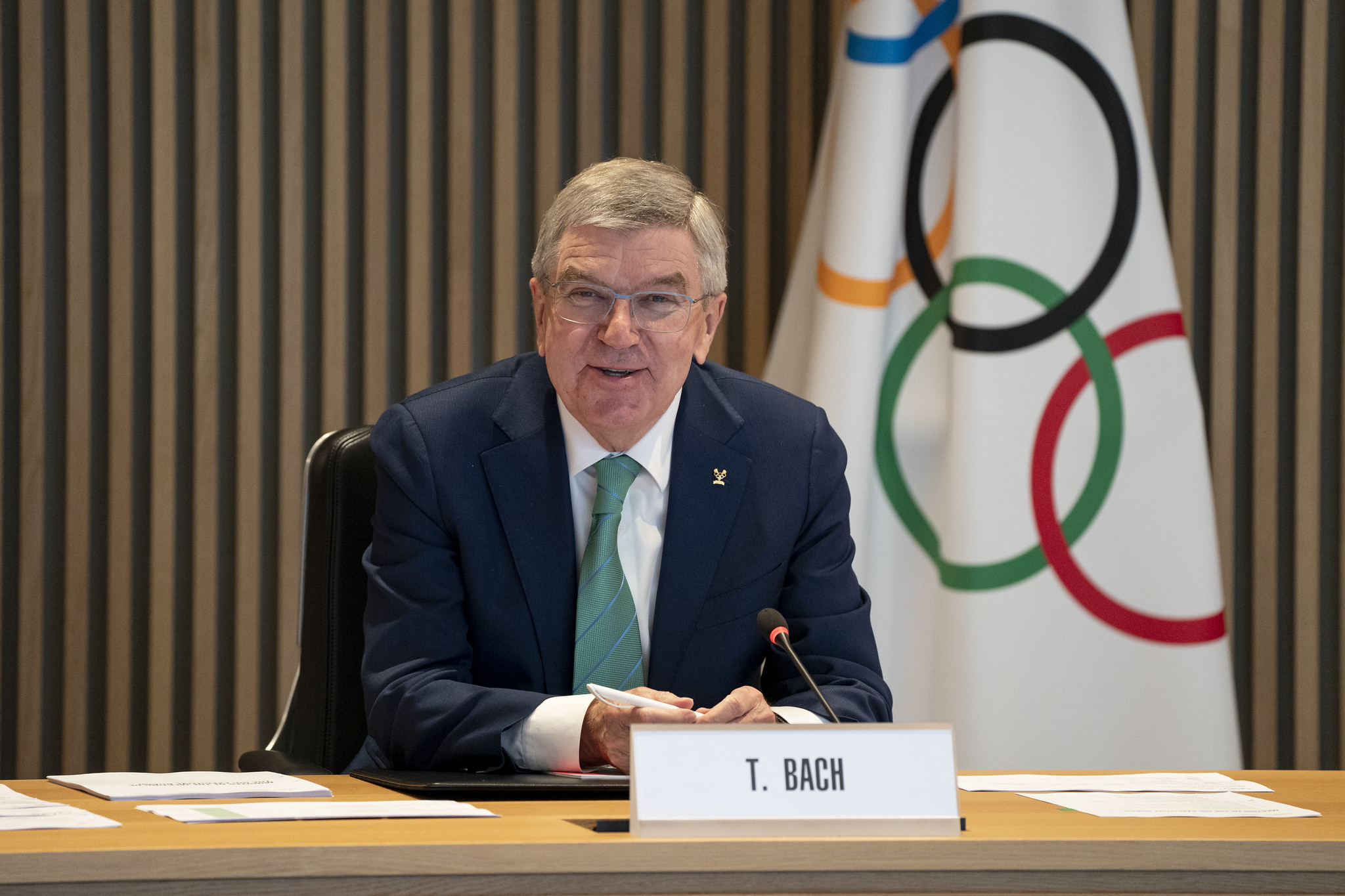 The International Olympic Committee is — for the first time since 2020 — not organizing either an Olympic Winter or Summer Games. Yet, the organization may be facing one of its most pivotal years in some time.

There are multiple issues the IOC must address for both of its editions of the Games and several decisions the IOC is facing will have an impact for years to come. As the calendar has turned to 2023, here are five issues that will be watched intensively on the Olympic scene.

The Issue: Russians and Belarusians were banned in February by most international sports federations after an IOC recommendation once Russia invaded Ukraine. But as qualification events for the 2024 Paris Games approach, IOC President Thomas Bach encouraged a proposal at the Olympic Summit to allow Russian and Belarusian athletes to compete as neutrals at Olympic Council of Asia qualifying events. In response, Ukraine President Volodymyr Zelenskyy told Bach in a phone call of his disappointment; after a Russian missile strike, Ukraine Foreign Minister Dmytro Kuleba said, “I invite all sports officials who want to allow Russian athletes to compete in international events because, as they say, ‘politics should be kept out of sports,’ to visit the Altair ice arena in Druzhkivka ruined by Russia’s ‘politically neutral’ shelling.”

Our Take: Bach underestimated Vladimir Putin’s plans for the invasion of Ukraine to be a long-term operation. If anything, Bach’s policy announcement in February was so fast it took the international sports community aback given his hair-splitting explanations as to how Russians have been allowed to compete for years in the Olympics given the country’s doping issues. Bach is now trying to find another way to split hairs and allow athletes to compete but with Ukraine being firm — and public — in its disapproval at any Russian participation, the IOC is stuck between a rock and a hard place.

The Issue: After years in which the International Boxing Association has been a thorn in its side, there are signs the IOC’s resolve has come to an end. The IOC told the Washington Post in November that recent IBA decisions could lead to “the cancellation of boxing” for the 2024 Games. The IBA is run by Umar Kremlev, who has close ties to Putin and since his reign began in 2017, the organization has essentially been bankrolled and supported by Russian interests. The IOC organized the 2021 Tokyo Games boxing competition and was planning to run the competition for Paris 2024; the sport currently is off the schedule for the 2028 Games in Los Angeles.

Our Take: The IBA is perhaps the most corrupt organization in world sports. It has been heavily hinted that several national governing bodies around the world, including USA Boxing, would like to form a new International Federation and such a development would be encouraged and supported by the IOC. Look for plans to form a new international federation to accelerate in 2023 and the IOC, should progress be satisfactory, keep boxing in the 2024 Games under its own supervision before allowing the new federation to come up with qualification guidelines and stay in the 2028 Games.

The issue: The operating budget for the 2024 Paris Olympics is expected to go up 10% in part because of inflation, organizers said in the fall. Organizers said half the extra money is needed to cover the impact of inflation, while some will go toward additional expenses for the Opening Ceremony and costs such as human resources and cybersecurity. The overall budget, including the cost of building and renovating venues, is about $8.2 billion and has already gone up from its original estimate. On the other hand, organizers expect to generate more income from ticket sales than expected.

Our Take: After three successive Games in the Far East, returning to Europe will be crucial for the IOC to showcase an Olympic movement that is financially responsive and achieves its aims of sustainable sport. Plans for an innovative Opening Ceremony should be commended. Per tradition, the IOC has shown concern over the increasing cost of Paris 2024’s budget while not showing a willingness to help organizers. With the 2026 Winter Games on the horizon in Italy already having issues with its budget and several European countries showing a hesitance to host future Games under the IOC philosophy of “we play, you pay,” making sure Paris’ planning continues without further financial struggles is vital for the IOC to show Europe that it is a responsible partner.

Winnowing the Field for 2030

The issue: The IOC announced in December it would postpone choosing a 2030 Winter Games host until 2024. Before that announcement, one of the three bidders — Vancouver — was dealt a gut punch when the province of British Columbia said it would not financially support the city’s 2030 bid. Since the IOC’s December delay announcement, Sapporo “paused” its bid following a decline in public support after a growing bribery scandal involving Tokyo 2020, leaving Salt Lake City as the only active bidder. Shortly after New Year’s Day, a Swiss newspaper reported the potential for a 2030 joint bid between Valais, Switzerland; Chamonix, France, and resorts in Italy. But within 24 hours of the report, French resort officials in Chamonix said “the project of a common candidacy for the Olympic Games as relayed by certain media is not on the agenda.”

Our Take: Salt Lake has from the outset looked to be the most well-organized bid and retains widespread local and statewide support. But commercial and sponsorship issues with a potentially short turnaround after the 2028 Summer Games in LA and 2030 Winter Games in Salt Lake has been a sticking point from the beginning. The IOC famously gave incentives for LA to wait until 2028 to host as part of its dual awarding with Paris 2024; when it announced that Paris would host the 2024 Games and LA would wait until 2028, the IOC advanced LA28 $180 million over its first five years of operations and agreed to give up its share of any surplus in exchange for LA waiting four years to host the Games. If Salt Lake remains the only viable bid in 2024, whether the IOC will make another financial accommodation will be watched intensely.

The Issue: The IOC said during the Beijing Games that it would not rush into its next U.S. broadcast contract. NBC holds the U.S. rights through the 2032 Games thanks to an extension signed in 2014 worth $7.65 billion. Viewership has declined significantly in the U.S.; the 2018 Winter Games in Pyeongchang had 12 nights in the top 100 broadcasts of that year; the Tokyo Games in 2021 had 11 nights in the top 100 but Beijing only had two nights in the top 100 — the Opening Ceremony and Night 11, which was broadcast on NBC immediately following the Super Bowl. The IOC has, in recent weeks, struck TV deals both in Australia and Europe so there could be news coming Stateside in the near future.

Our Take: Paris’ visibility as one of the great cities of the world should provide a bump for U.S. TV viewership in 2024 and clearly a giant boost will happen in 2028 in Los Angeles. One of the reasons the IOC would prefer Salt Lake host the 2034 Winter Games is that it would be a valuable property up for bid in a new contract that could also attract a streaming service such as Amazon or Apple in an age where sports rights are exploding in price. Given its outsized impact on the organization’s overall budget, a new U.S. broadcast deal with a big increase is imperative for the IOC’s bottom line. But there is a warning sign from overseas; the Australian rights were won by Nine Entertainment Co., including the home games of Brisbane in 2032, beating incumbent Seven West Media. But while the IOC will get an increase ­— reportedly over $300 million for a three-Games package — the IOC was hoping the package would bring in $400 million. Terms for the IOC’s deal announced Monday with the European Broadcasting Union and Warner Bros. Discovery through 2032 were not announced.