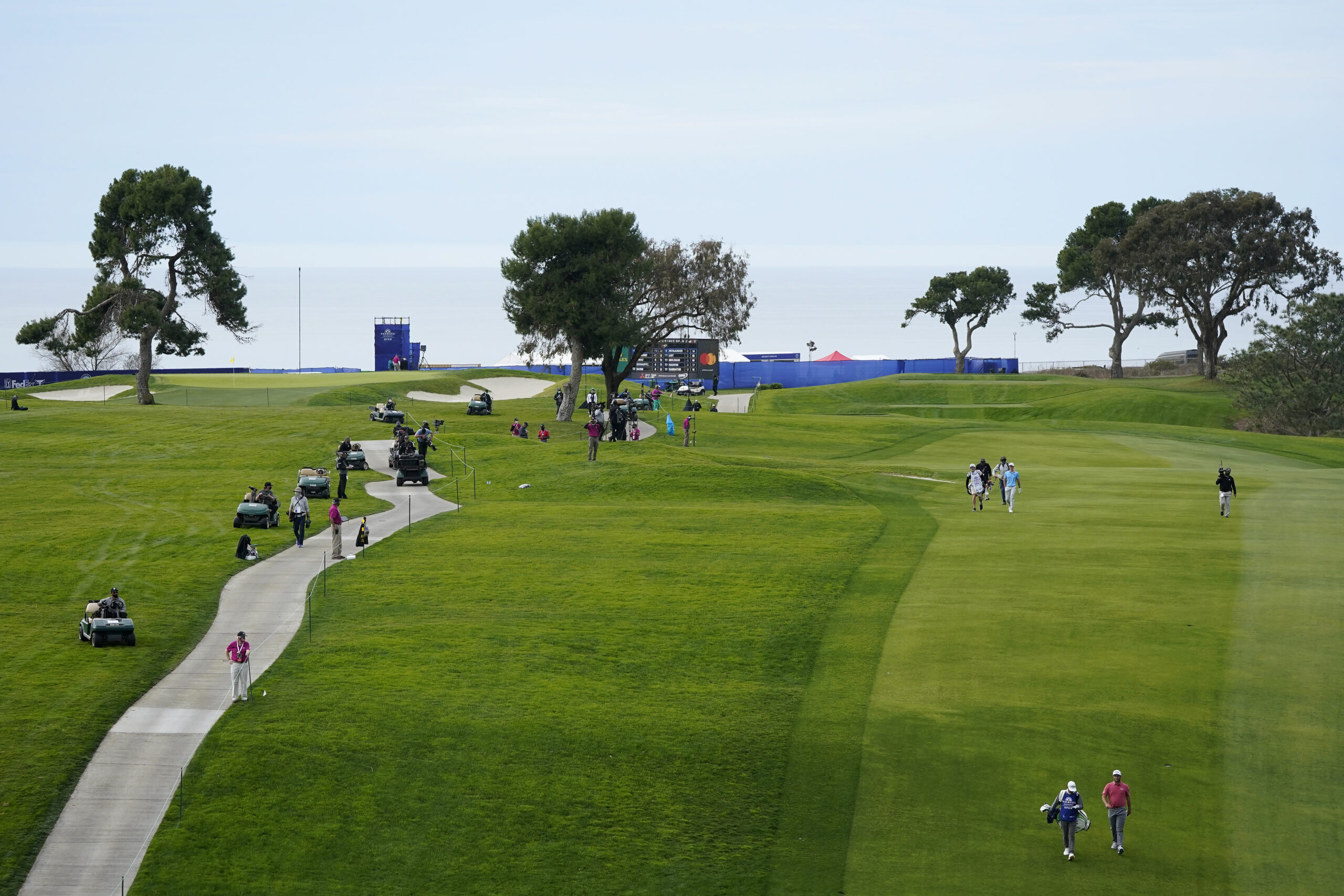 Jon Rahm, lower right, walks down with 13th fairway with his caddy, Adam Hayes, on the South Course during the final round of the Farmers Insurance Open at Torrey Pines on January 31, 2021, in San Diego. (AP Photo/Gregory Bull)

The differences in planning and producing a PGA Tour event, especially in a state with stringent restrictions on fans and on-hand employees, was laid bare during a recent webinar featuring those involved with the recent Farmers Insurance Open at Torrey Pines Golf Course in San Diego.

Nick Schling, director of operations for the Farmers Insurance Open, said that typically the course buildout begins in October with up to 300,000 square feet of temporary flooring spread throughout the course between food and beverage areas, hospitality suites and sponsor activations. This year, he said, the build did not start at Torrey Pines until New Year’s Eve with only 20,000 square feet of buildout needed: “It looked a lot different out there.”

During the interview, “Navigating the Challenges of COVID & Producing a PGA Tour Event,” Schling said lots of preparation also went into making sure that the event organizers and PGA Tour were squared away with the tour’s testing program that has been in place since tournament play restarted last June, making sure that all health and safety protocols were in line with the expectations from the health department of San Diego County.

“That was a big part of my time this year was COVID compliance,” Schling said. “When I look back on the 2021 Farmers Insurance Open, what I will remember are all the phone calls with doctors, nurses and epidemiologists.”

From the Archives: How the PGA Tour’s Aggressive COVID-19 Testing Has Kept Events Going
The tournament is organized by The Century Club of San Diego, a charitable group established in 1961. Andy Harmatys, senior vice president of tournament affairs and events for The Century Club, emphasized the amount of coordination that had to go on with local and state health authorities at every turn. This year’s tournament, instead of the 300 temporary restrooms on the course, had only 60 — but each one had to be sanitized and disinfected every 60 minutes, so the labor bill for temporary restrooms was about the same this year without fans as it would have been with a packed course.

“We really had to think through every single (volunteer), what role they have at the event and then take (health officials) through, from start to finish, what their day is like and what the physical touchpoints were, then apply the health protocols to those individuals and how the day would go,” Harmatys said. “Not only on the competition days but the pro-am days as well.”

Having to adjust on the fly was also emphasized. Schling said when the initial tournament plan was submitted to San Diego County for approval, the region was allowing 25 percent capacity for indoor dining. By the time mid-December rolled around, the region had been moved to Tier 1 in California, which allowed for only outdoor dining; shortly before the tournament was about to take place nearly the entire state was under a stay-at-home order with no outdoor or indoor dining allowed. Because of the shifting tiers that the region was under, Schling said tournament organizers communicated with the county that they would not be doing any dining operations but there would be a food consumption tent for the tournament volunteers to take the lunch breaks they were entitled to take.

Harmatys said the entire tournament plan sent to the county health department was around 75–80 pages long and that after a thorough review, only one sticking point remained — but that it almost sank the entire tournament: Whether or not caddies would be required to wear masks when walking the course, which the health department wanted but the PGA Tour was opposed to.

“The conversation we had with the county was, ‘let’s take you through what it’s like to be a professional caddie,’” Harmatys said. “Could you do this? Basically, we said ‘hey, can you walk 4.5 miles with a 55-60 pound bag on undulating property for 5 ½ hours?’ The response was ‘No.’ So they didn’t have to wear masks. We had to take it down to that level of detail.”