Home > Rugby > For One Small City, Rugby as Economic Development 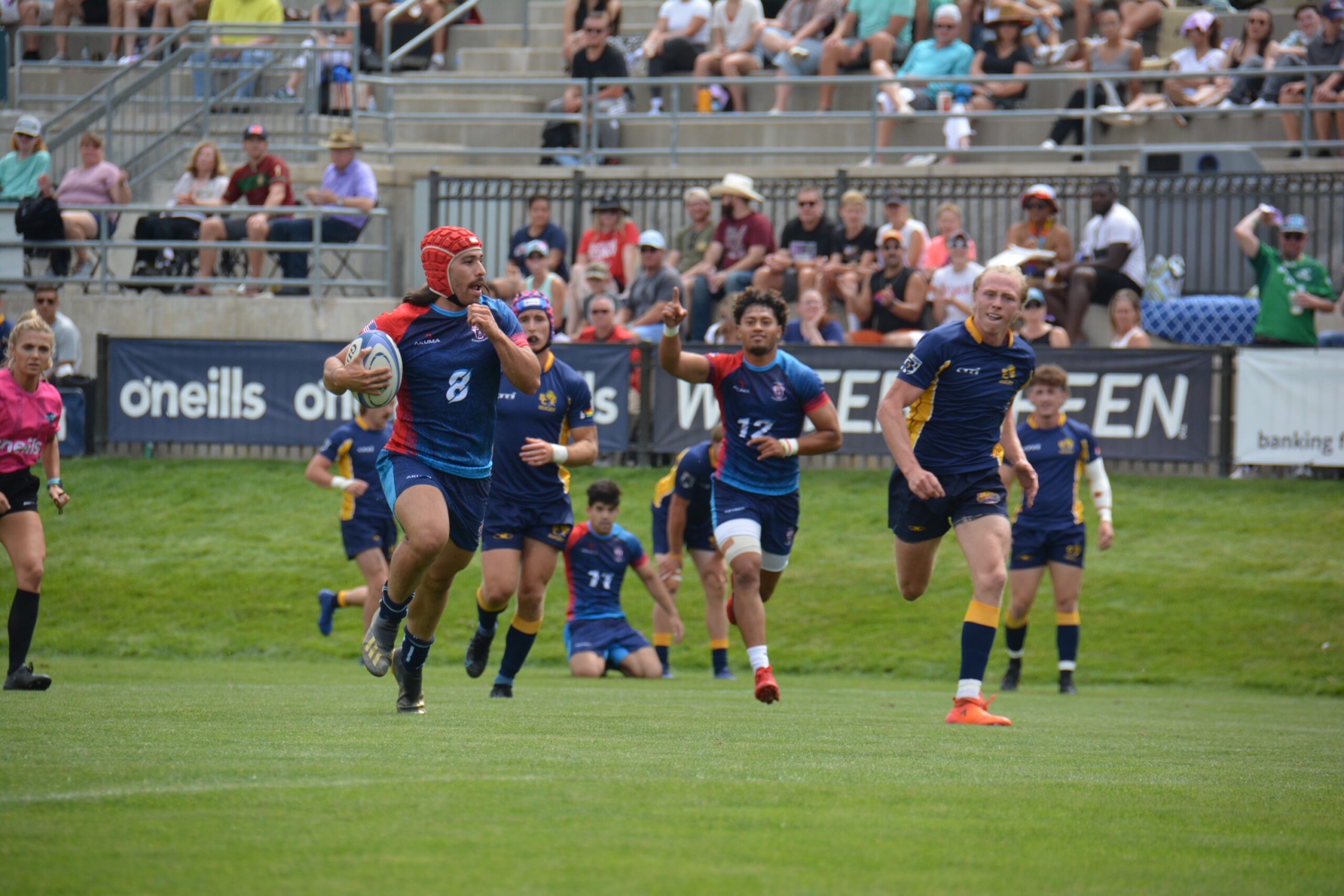 Infinity Park in Glendale, Colorado, was the first rugby-specific venue built in the United States. (Photos by Jason Gewirtz)

Glendale, Colorado, is the kind of city that you’d never know you were in unless someone pointed it out. At 369 acres, the enclave that is home to about 5,000 mostly apartment-dwelling residents is surrounded on all sides by the city of Denver.

For years, if you knew anything about Glendale, it might be as the home to a couple of strip clubs along the Denver area’s heavily traveled Colorado Boulevard.

But for the past 15 years, fans of rugby know Glendale for something much more than that. Over that stretch — and after building the first rugby-specific stadium in the United States — Glendale has earned its moniker as RugbyTown USA. And its investment in the sport has made rugby its most important piece of economic development.

“We had a small community that needed to make a big impact from an economic and tourism perspective,” said Linda Cassaday, who has been city manager since 2004. “And rugby gave us that differentiating factor.”

The recent 10th edition of the RugbyTown Sevens Tournament, which featured U.S. military branches competing against international and development squads, underscored the city’s investment in the sport, which is now on the Olympic program in its sevens format. And the upcoming Rugby World Cup in the United States (2031 for the men, 2033 for the women) in the traditional 15-a-side format may further justify the city’s decision long ago to invest in one of the most popular sports in the world as its economic future.

“Our economic development initiative took a different form in building the first city-owned rugby complex in the country,” Cassaday said. “That has put us on the map both domestically and internationally. It’s really changed the face of Glendale.”

A Mayor With an Idea

Glendale’s embrace of rugby began with Mike Dunafon, a former Denver Broncos player who was mayor pro tem when the idea first surfaced. Today he serves as mayor. After getting injured playing football, Dunafon discovered rugby by sailing in the Caribbean and got hooked on the sport. As he thought about building something in Glendale for rugby, he liked that it wasn’t as equipment-heavy as other sports and appealed to an international community, Cassaday said.

Another thing going for Glendale was it already had an international presence, as many people first coming to the Denver area have found homes in the city’s multiple apartment complexes. At one point, 13 different languages were spoken by residents, Cassaday said.

“Anyone can build a soccer field or softball or baseball diamonds — there are a lot of those around,” Cassaday said. “No one had a rugby-specific stadium. We felt from a domestic and international standpoint it could be something that could put Glendale on the map.”

That’s how Infinity Park came to be: A 5,000-capacity stadium designed for rugby, built in 2007. In time, a practice field was built and Glendale was off on its rugby journey. Today, the complex has the main stadium, a nearby pitch that serves as a practice field and a rugby training center. In 2020, the city also found space near Infinity Park for the permanent headquarters of USA Rugby, whose 15s national teams also call the venue their home for training.

Ross Young, the chief executive officer of USA Rugby, said the national governing body saw an opportunity to keep its national team development in one location while the NGB sought more high-profile events.

“As we look to grow rugby, we want to be aiming for international games,” he said. “We’ve had U.S. Eagles games in Houston with 30,000 (spectators) and in Chicago with 70,000. Glendale is a great training facility with a great surface and a full-sized rugby pitch. We saw it as the best way to build on a Center of Excellence for our men’s and women’s 15 teams.”

“There’s constant talk and we get constant inquiries about financing and putting together structures that would engage the rugby community.”
—Ross Young, USA Rugby CEO

And while Glendale may have been the first to launch a rugby-specific stadium, they are no longer the only one in the country, a further sign of the sport’s growth. Aveva Stadium is another rugby-specific venue that is home to the Houston Sabercats in Major League Rugby. More are coming including proposed projects in North Carolina, Utah and Arizona.

“It’s already happening,” Young said. “There are a number of them popping up. Some of them started before our World Cup bid but that certainly heightened it. There’s constant talk and we get constant inquiries about financing and putting together structures that would engage the rugby community.”

Since its opening, tournaments and events have come and gone at Infinity Park (a Major League Rugby team, the Raptors played in Glendale from 2018–2020) but one mainstay on the calendar has been the RugbyTown Sevens Tournament, the most recent of which was staged August 19–21.

The tournament began as an idea from an Air Force veteran, Gary Heldfedt, who wanted to create a sevens competition for the nation’s military branches akin to a similar tournament in 15s that had been held elsewhere for years. Glendale proved to be the perfect fit. The first edition of the event saw military teams from England and Australia come as well. The city also organized a consecutive tournament for non-military teams.

After a year trying to do two events as once, the city decided to combine them into one weekend-long event. This year’s edition featured 20 teams, including a pool from the U.S. military branches, which featured every branch except the Space Force. In the other pools, teams came from countries that included Germany, South Africa, Israel, the United Kingdom, Canada and Barbados.

“This is a tournament that has a real special feel to it because it’s not played on a high school football field or a soccer field,” Cassady said. “It’s played in a place called RugbyTown.”

The international teams play a big role in filling the city’s seven hotels during the event. Fans of several teams also travel well, giving Glendale an even bigger tourism boost from the tournament, which is streamed around the world as well.

The event has also grown to include an esports element in the conference center that sits adjacent to the field as well. During RugbyTown Sevens, the Warrior GMR Foundation conducted several events, including for Gold Star children who have lost parents in the military. Military branches also competed in the tournament, which was held in a conference center alongside the action on the pitch.

“They have found that esports has been helpful in treating PTSD and other traumas that are more military-specific,” Cassaday said. “They came to us a couple of years ago and asked if we could do a military esports component. We felt that could provide a cool way for the esports members of the military to rub shoulders with the rugby part of the military. That’s been a really cool thing.”

A World Cup of Opportunity

While Glendale leaders could not have anticipated the global sports calendar when they went all in on rugby 15 years ago, recent developments have shown their investment may pay off in the years to come.

In 2016, rugby sevens was added to the Olympic program, giving new exposure to the sport. And earlier in 2022, the United States was awarded the rights to host the Rugby World Cup, with the men’s event scheduled for 2031 and the women’s event for 2033. While those games will be played in larger stadiums than Infinity Park, the effort that will be put in by USA Rugby and World Rugby to grow the sport over the next decade will no doubt pay dividends for Glendale.

“From an Infinity Park standpoint, because the (U.S.) men’s and women’s teams train here, that gives us a whole lot going on,” Cassaday said. “We are specifically training American players that will be trained to take a place on the national team at some point in the future.”

Young noted if Denver is chosen as a host city from among a shortlist the NGB has already identified, the Glendale campus will be an ideal hub for training. “They’ve got a role to play,” he said.

Regardless of the eventual host cities, Cassady said the events will increase exposure for the sport domestically in the years to come.

“I really do think it’s going to get the attention that rugby needs to get domestically,” she said of the two upcoming World Cups. “It’s the No. 2 sports outside the United States and the No. 2 most-watched sport around the world but the U.S. has not been able to break through yet.”

‘We Needed to Create Something’

Glendale, meanwhile, has found a way to break through by aligning itself with that growth. From the beginning, the play has been to increase the city’s awareness by attaching itself with something specific, a move that has seeped into everything the city does. Its police provide security at Infinity Park events. Its public works employees maintain the pitch. Its parks department provides programming for recreation on the adjacent fields.

In time, plans include an entertainment district to expand the offerings around the venue. But for now, Infinity Park has helped a small city come through with a big identity in one of the world’s most recognized sports.

“A lot of people are not aware that Glendale is its own city,” Cassaday said. “We felt we needed to do a better job at branding the city. If we wanted to be known for something, we needed to create something.”