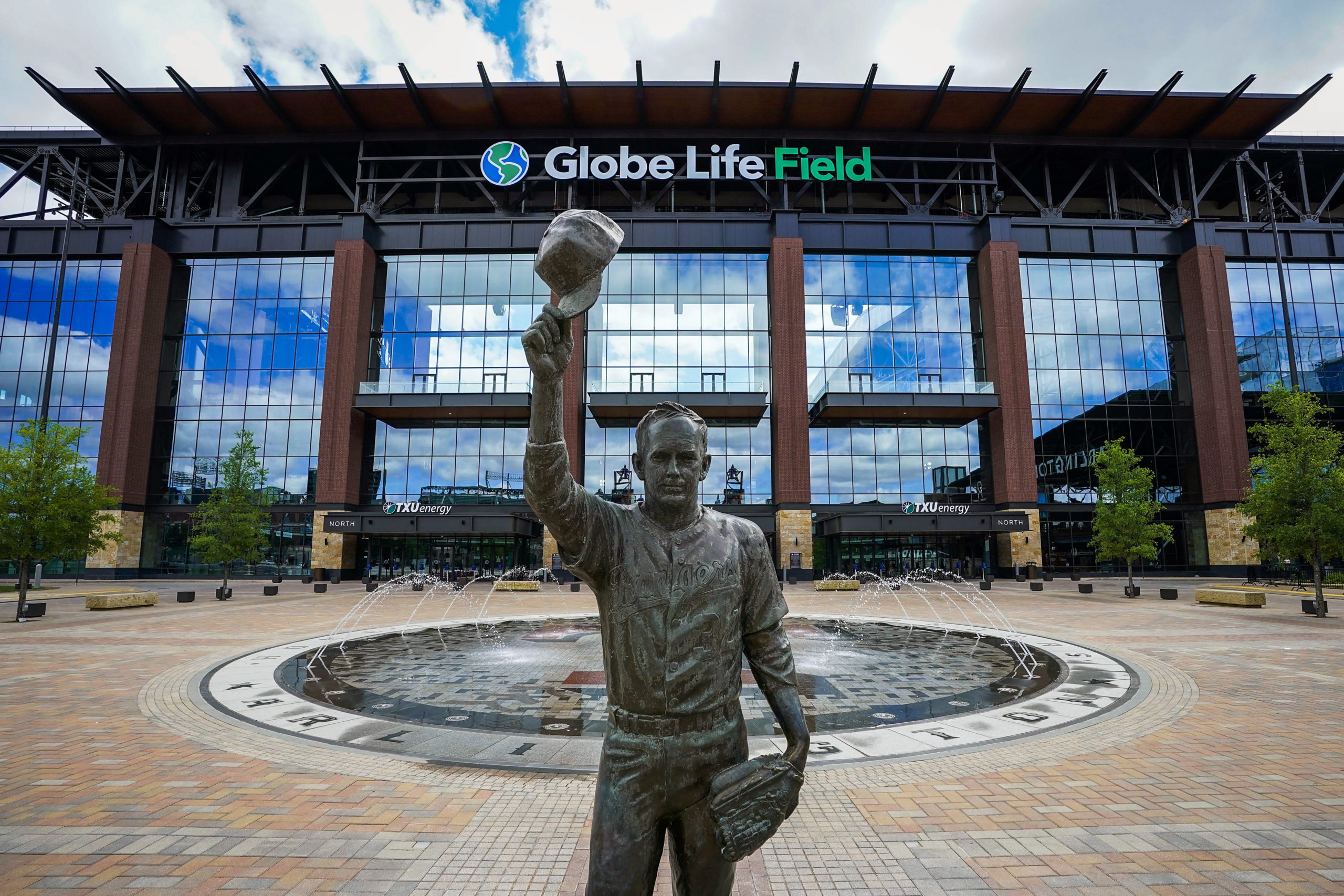 A statue of Hall of Fame pitcher Nolan Ryan stands in the plaza outside Globe Life Field in Arlington, Texas. The stadium will be host for the 2024 All-Star Game, Major League Baseball has announced. (Smiley N. Pool/The Dallas Morning News via AP, Pool)

The home of the Texas Rangers, Globe Life Field features a retractable roof and a capacity of more than 40,000. The venue opened during the summer of 2020 amidst the pandemic. The 2024 All-Star Game will be the fifth time the state of Texas hosts the Midsummer Classic and the first time since Minute Maid Park in Houston hosted in 2004.

Globe Life Field famously hosted the 2020 World Series and National League Championship Series bubble after a 60-game regular season. Those events were the first MLB games to allow spectators back into a stadium in nearly a year. The 2020 World Series featured the Los Angeles Dodgers defeating the Tampa Bay Rays in six games.

“The Texas Rangers are honored to be awarded the 2024 All-Star Game,” Rangers majority owner and managing partner Ray Davis said. “With the opening of Globe Life Field in 2020 and the incredible development that continues to take place around the park, Arlington is an ideal location to host Major League Baseball and the Midsummer Classic.

“We want to thank Commissioner Rob Manfred, the State of Texas and the Governor’s Office, the Cities of Arlington and Fort Worth, and all of the dedicated officials from the Arlington Convention and Visitors Bureau and Visit Fort Worth for their efforts in bringing this showcase event to the area.”

Before being awarded the 2024 game, the Texas Rangers had the fifth longest drought of all MLB teams when it came to hosting the event. It hosted the All-Star Game in 1995 at the Ballpark in Arlington, the Rangers’ previous home venue before moving to Globe Life Field. The 2004 All-Star Game in Houston was the third time that city had hosted (1968 and 1986 in the Astrodome).

“Major League Baseball is pleased to award the 2024 All-Star Game to the Rangers and the Cities of Arlington and Fort Worth, which presented a robust bid for All-Star Week,” Manfred said in a statement. “The Rangers stepped up under difficult circumstances and Globe Life Field served as terrific host for the 2020 Postseason, including the World Series. We are excited to once again feature Baseball’s newest ballpark on a global stage next summer.”

The Dodgers hosted 2022 All-Star Week, having missed on hosting its scheduled All-Star Game in 2020 because of the pandemic. The 2021 All-Star Game was in Denver after it was moved on short notice out of Atlanta after a new law in the state of Georgia was passed that includes restrictions on voting by mail and greater legislative control over how elections are run.

Three of the next four All-Star Game locations have now been determined. The 2023 Midsummer Classic will be played at T-Mobile Park in Seattle, marking the third time the Mariners have hosted and first since 2001. After the Rangers host in 2024, the 2025 site has yet to be announced. Major League Baseball previously announced the 2026 All-Star Game will be held in Philadelphia as part of the league’s celebration of the 250th anniversary of the signing of the Declaration of Independence.

The American League has won nine consecutive All-Star Games and 21 of the past 25 overall.