At a sporting event as big as the Olympics, there is often an entire series of events taking place outside the competition that keep event organizers of all kinds busy. At night, during or following the last competitions, some of the most popular places around are the hospitality houses organized by various nations. Each country has their own approach and philosophy to the houses. USA House, for instance, is a private building mainly used as a refuge from the Olympic grind for corporate sponsors, athletes and other members of the Olympic family. Other houses, though, have portions that are open to the public where food and drink special to that nation are sold, and another private portion is typically reserved for special guests.

One of the most popular of those public-private ventures is the Heineken Holland House where you could image what drink might be on tap. It is a ticketed affair at a venue built within a conference center of a hotel in the coastal city of Gangneung, but SportsTravel found our way in last night thanks to George Washington University Professor Lisa Delpy Neirotti (who knew someone who knew someone, as these things go…) on what wound up being a good example of that other part of the Olympics you don’t see on television. 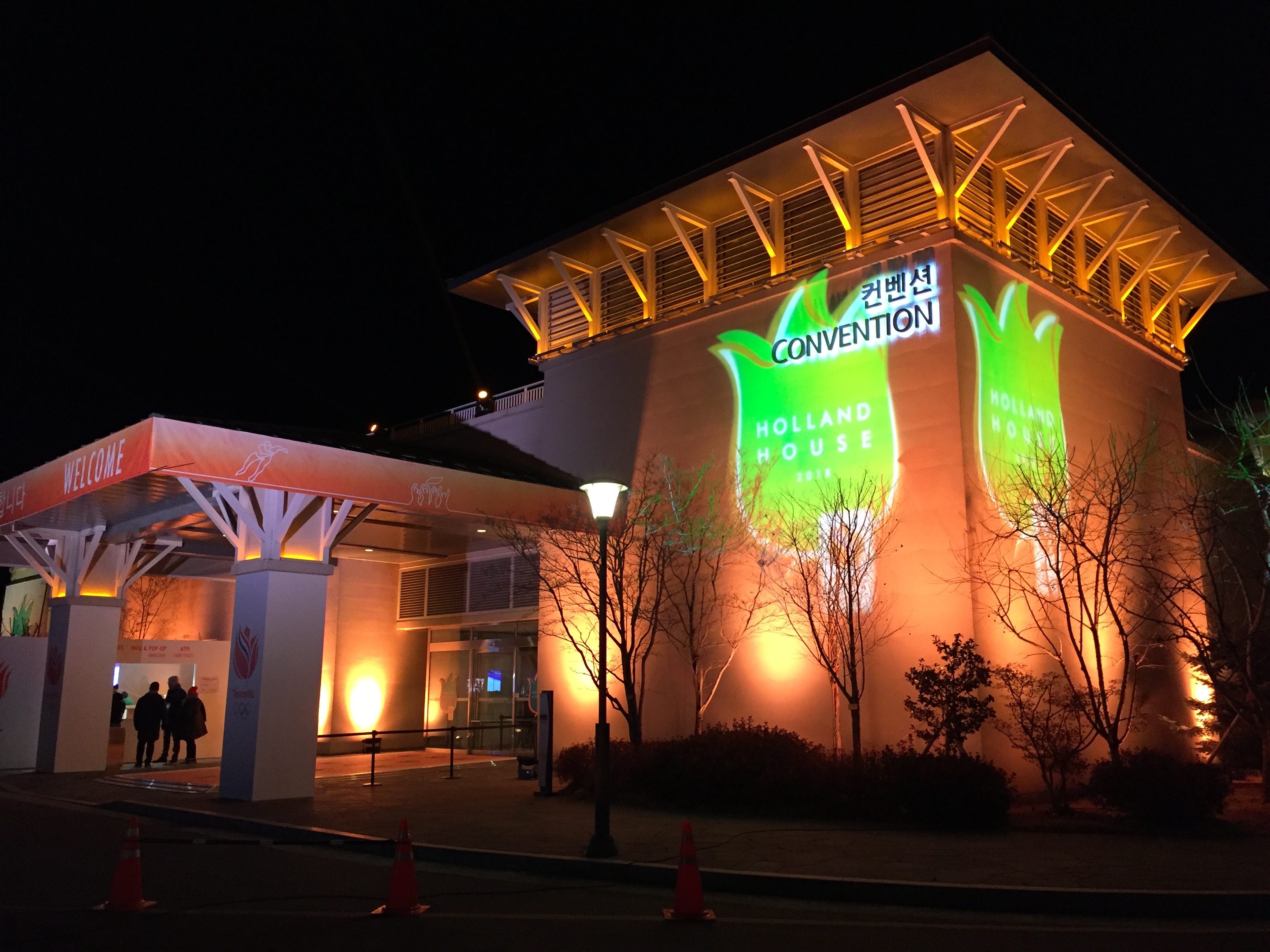 As luck would have it, as we pulled up, the Netherlands’ Ireen Wust was competing live in the women’s 1500m speedskating finals at the Gangneung Oval. When the only woman left who could beat her time failed to do so, Wust secured a gold medal—her fifth gold in four Olympic Games and 10th overall, making her the most decorated speedskater in history. (She also became the first woman to win a gold medal in four straight Olympics in any sport, winter or summer.) In speedskating-mad Netherlands, Wust’s victory caused so much celebration that our ticket takers at Holland House had to take two minutes to jump up and down and hug each other first before attending to us. 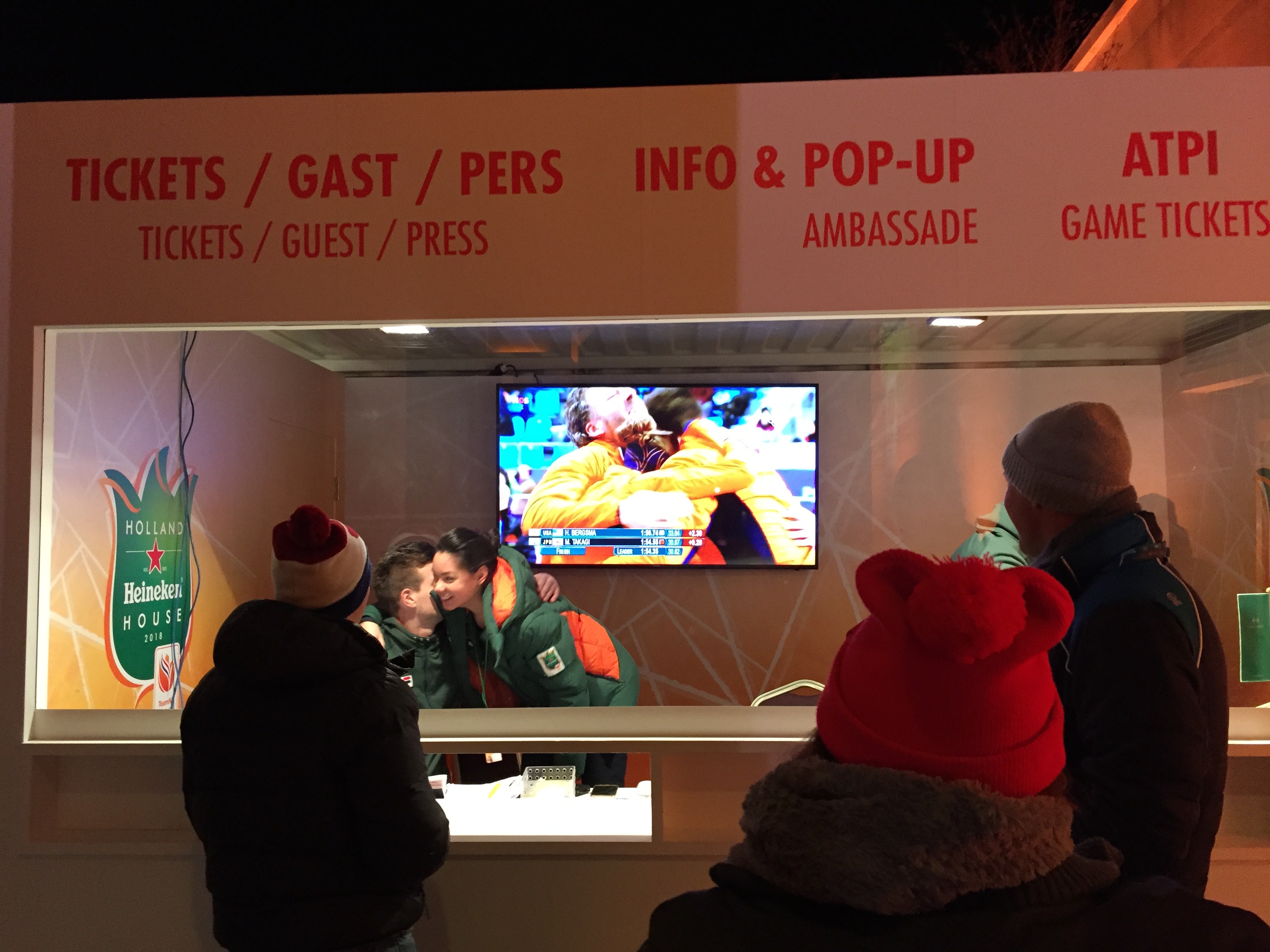 Inside Holland House, there is a private room where meals are served and a separate bar that caters to the high-end clientele. But next door is a more public space with more bars, and, it turns out, two stages, one of which featured an endless rotation of DJs, singers and bands, each with high-definition video cameras following them and broadcasting the show on screens in the other portion of the room. As the evening progressed, the crowd—mostly dressed in the orange that defines the Dutch Olympic uniforms—got larger but also included some notable Americans, including U.S. Figure Skating CMO Ramsey Baker, USA Curling CEO Rick Patzke, and NFL tight end Vernon Davis, who recently recorded a promotional video for USA Curling as part of a sponsorship the national governing body has with Cheetohs.

But the real magic happened later in the evening, about 1:30 a.m., when none other than Ireen Wust not only came into the ballroom, but entered through a secondary stage with her name on a screen behind it as the adoring crowd cheered and cheered and she bounced up and down herself. 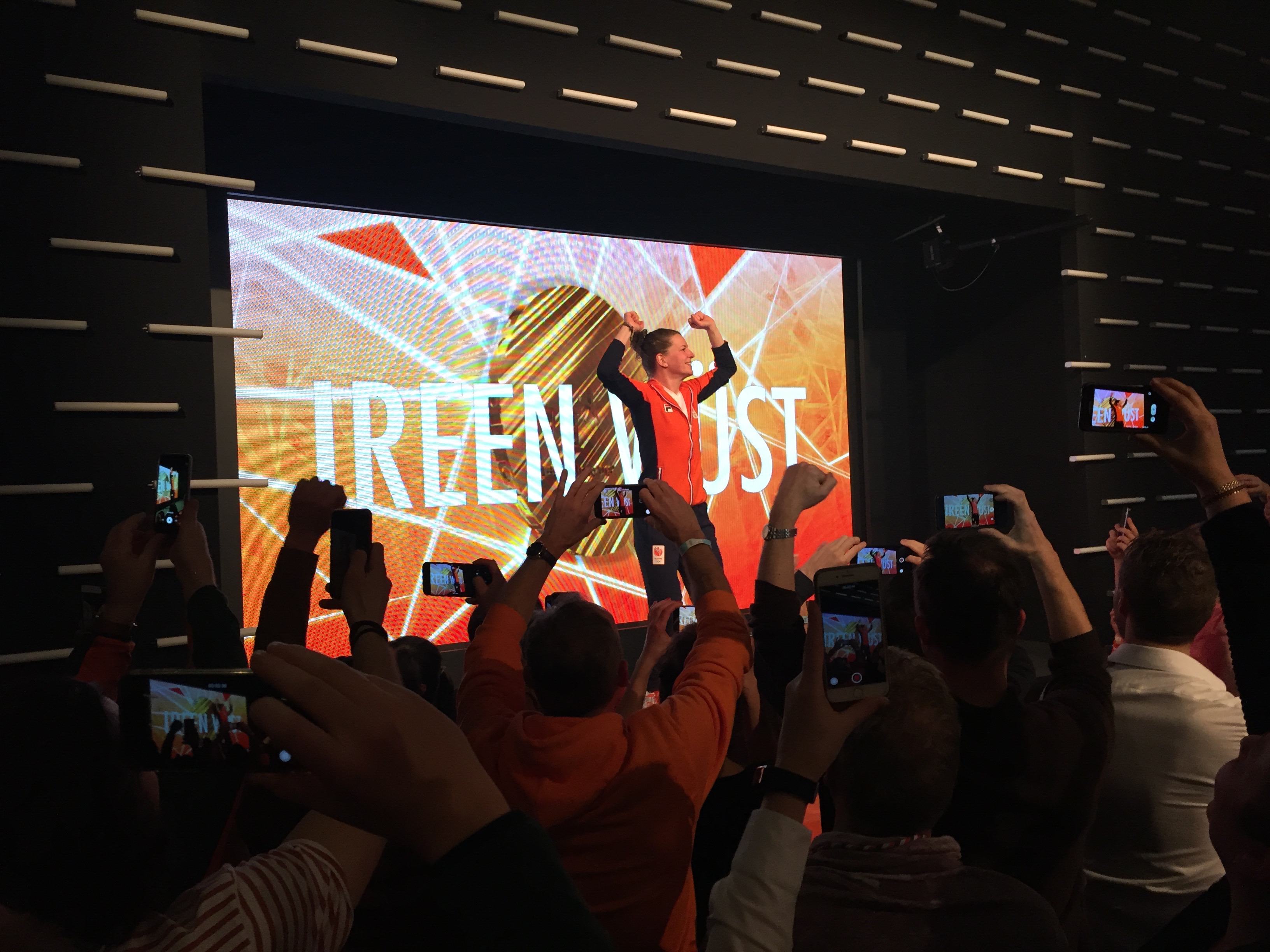 She then segued to the main stage, where a band that was playing stopped to interview her, her parents were brought out and she was presented with an enormous gold medal. Then, impossibly, streamers rained from the ceiling much as they might at the end of a professional championship in any North American sport. 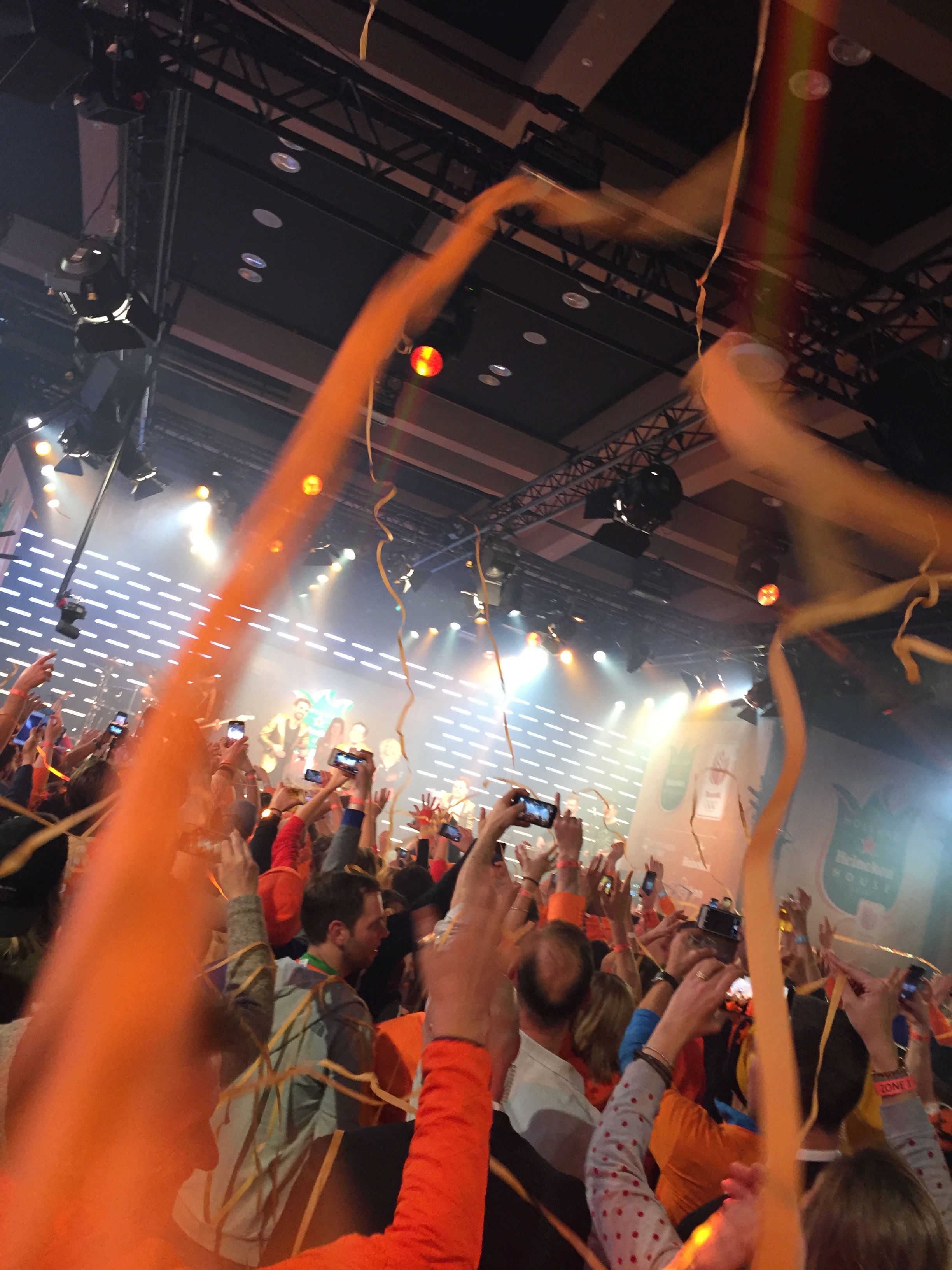 It was all display of national pride and goodwill that Holland House had down pat. And with the number of people paying to get in and staying for hours, it surely is a good business model for how to organize an event that pleases the crowd and gets the message out about how your nation might be fun to visit. 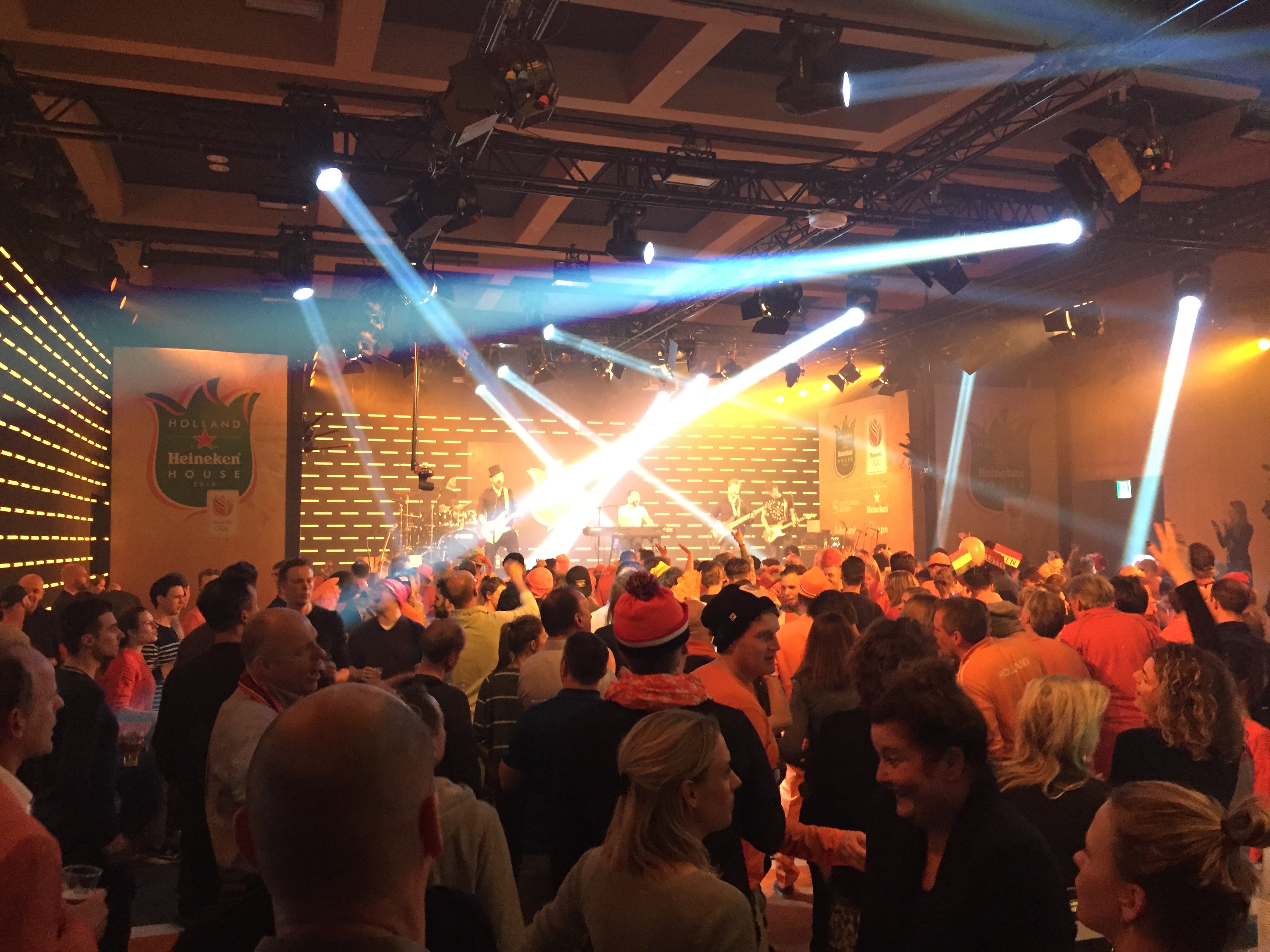