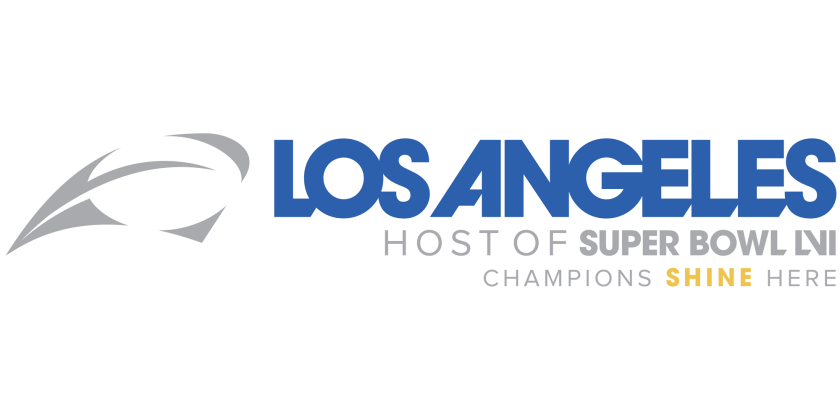 The Los Angeles Super Bowl Host Committee, ahead of the 2022 Super Bowl that will be at SoFi Stadium in Inglewood, California, unveiled the official committee logo and launch video, featuring Snoop Dogg, alongside the NFL’s trademark Super Bowl LVI mark.

The logo is inspired by SoFi Stadium’s design and the campaign tagline “Champions Shine Here,” as a way to spotlight the decade of major events coming to the region starting with Super Bowl LVI in 2022. The committee’s website has also gone live at http://lasuperbowlhc.com.

SoFi Stadium opened this past NFL season, which concluded on Sunday with the Tampa Bay Buccaneers winning Super Bowl LV at home against the Kansas City Chiefs. The venue is the home of the Los Angeles Rams and Los Angeles Chargers.

The Rams and Chargers did not have fans at home games this season because of the COVID-19 pandemic. The stadium will regularly seat 70,000 but will be expandable to 100,240 for special events such as the Super Bowl.

“We are proud to host Super Bowl LVI and will work with all our partners to deliver an extraordinary and unparalleled experience next February,” said Los Angeles Rams Owner/Chairman and SoFi Stadium and Hollywood Park Developer Stan Kroenke. “We ask that fans continue to do all they can to stay safe so that we can be together next year at SoFi Stadium. Aside from the great competition and entertainment that are hallmarks of Super Bowl, we look forward to celebrating the many frontline workers who are already making this event possible through their amazing sacrifices and commitment.”

“I’ve said many times that Stan Kroenke’s vision for Hollywood Park, anchored by our iconic SoFi Stadium home, will not only redefine the city of Inglewood, it will redefine the landscape of greater Los Angeles for the next century and beyond,” said Los Angeles Chargers Owner and Chairman of the Board Dean Spanos. “In the wake of a global pandemic that isolated families, displaced businesses and changed our general way of life, this vision is no longer just about redefining a city, it’s about breathing life back into it. Super Bowl LVI won’t just be the biggest event of 2022, it will be a much-needed catalyst for our region’s recovery.”

One of the first initiatives from the committee is the Super Bowl LVI Business Connect program. Businesses owned by minorities, women, LGBTQ+ community members and veterans are being invited to compete for contracts related to it through February 23. Businesses that qualify will have opportunities to network with NFL representatives, host committee staff, corporate sponsors and local small business service organizations.

“High-profile events like the Super Bowl will help many businesses – and its thousands of workers – get back on their feet,” said Kathryn Schloessman, Los Angeles Sports & Entertainment Commission president and CEO. “In Southern California, this has the potential to be an enormous boost for residents who work in restaurants, hotels, event venues and related industries that have been hit especially hard by the pandemic.”