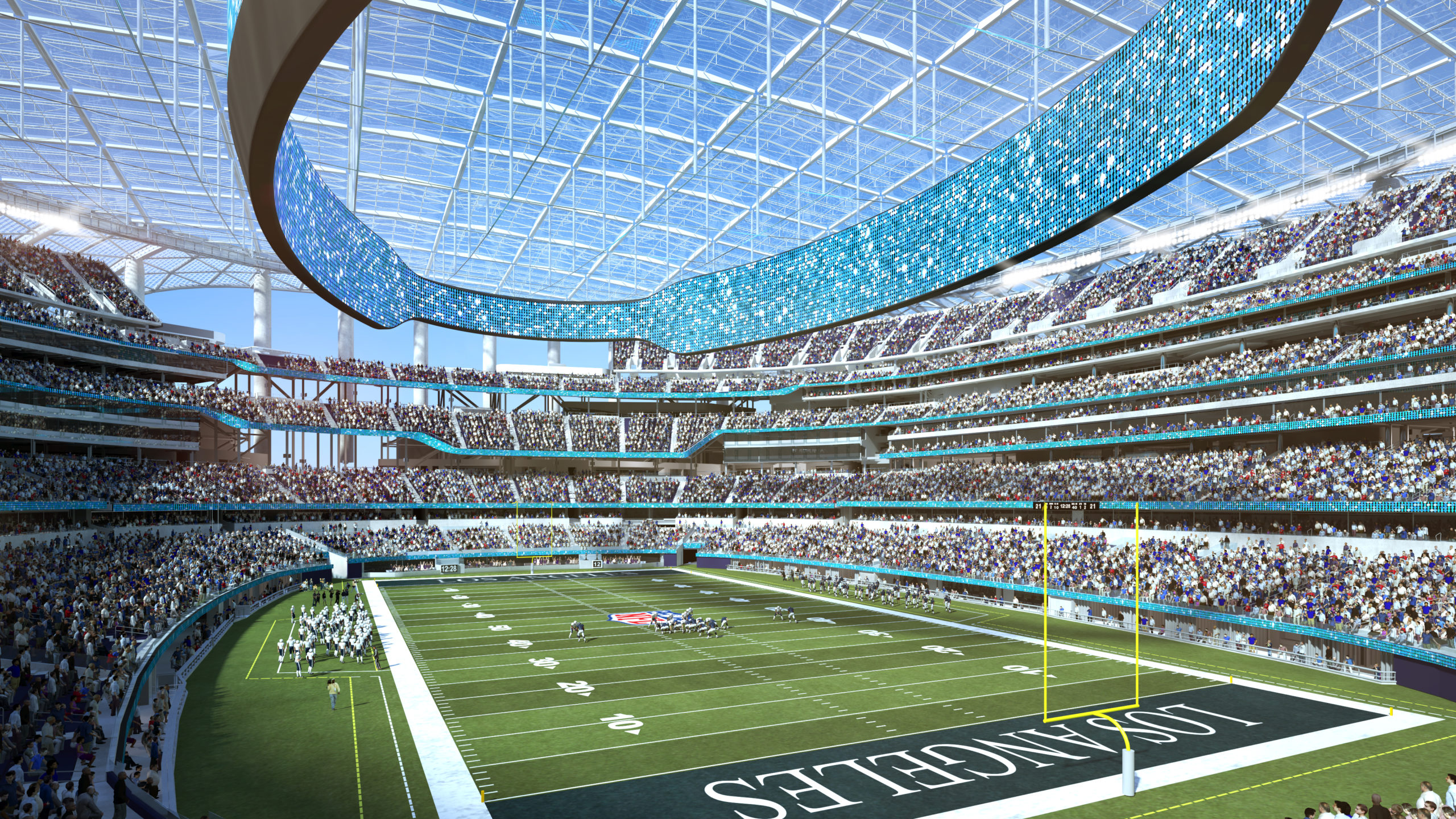 Even for a city with the history of hosting major sporting events, the upcoming decade for SoFi Stadium in Los Angeles will be unlike any other that a destination has experienced.

What is being called “the decade of opportunity” will see the new home of the Los Angeles Chargers and Los Angeles Rams host the annual Los Angeles Bowl starting in 2020, WrestleMania in 2021, the Super Bowl in 2022, the College Football Playoff championship game in 2023 and the Olympic and Paralympic Summer Games in 2028 with the potential for more to come.

“Our opening lineup is probably from my perspective unlike any other first 10 years of any building in the world,” said Jason Gannon, managing director of SoFi Stadium and Hollywood Park. “Whenever you layer in the opportunity with the Los Angeles Rams and Los Angeles Chargers and the NFL, the Super Bowl, the CFP, the LA Bowl, the Opening and Closing Ceremonies for the Olympics, it’s really an exciting 10 years ahead.”

Kathy Schloessman, president of the Los Angeles Sports and Entertainment Commission, said when the NFL announced in January 2016 that the Rams would move to Los Angeles, mixed with a rush of technology companies coming to town and a downtown revival underway, it served as the impetus for bidding on big events.

Having the NFL in town allowed Los Angeles to bid for the Super Bowl and within months of the Rams’ relocation being approved, the NFL awarded Los Angeles the rights to a future Super Bowl. The bidding bonanza continued in September 2017, when the city was awarded the rights to the 2028 Olympic Summer Games. Within two months of that announcement, the CFP said it would be coming to town. WrestleMania and the L.A. Bowl were added to the schedule in early 2020.

“One of our main focuses is heads in beds and getting hotel rooms filled,” Schloessman said. “We’re trying to pick times that the occupancy is a little bit less (to bring in events). The point of getting this business here is to bring business to people who need it.”

SoFi Stadium, which will cost close to $5 billion and will seat 70,240 for Rams and Chargers games with the ability to expand to approximately 100,000 for larger events, is the centerpiece of a mixed-use development at Hollywood Park that will eventually include retail and commercial office space, a hotel, residential units and outdoor park areas. There is a performance venue as part of the American Airlines Plaza entrance to the stadium that will accommodate 6,000.

But getting to this point has not been straightforward.

The NFL had plans to build a stadium in 1995 — at the cost of $200 million — for the Raiders to relocate from Oakland before negotiations fell through. After a long period of downtime before Kroenke acquired the land and brought the Rams to town, construction in Inglewood started in 2015 with a targeted opening for 2019. But within months, a record amount of rainfall postponed the stadium’s opening until 2020. Construction continued through the coronavirus pandemic with a reported dozen workers testing positive for the virus and then took a tragic turn when an ironworker died after falling from the roof in early June.

Because of its location four miles from Los Angeles International airport, those who go to SoFi Stadium actually go underground; the stadium sits 100 feet below sea level, making the “ground floor” either the fifth or sixth level of the stadium depending on whether fans enter the east or west side. Developers had to pay $29 million for a secondary radar system because of nearby LAX, which thanks to the translucent roof provides a consistent view of planes flying overhead. Being that it is California, parts of the stadium that are underground are lined with a mechanically stabilized earth wall should an earthquake occur.

“Any construction project, you’re constantly managing the schedule,” Gannon said in February. “We’ve managed through things in the normal course of order.” 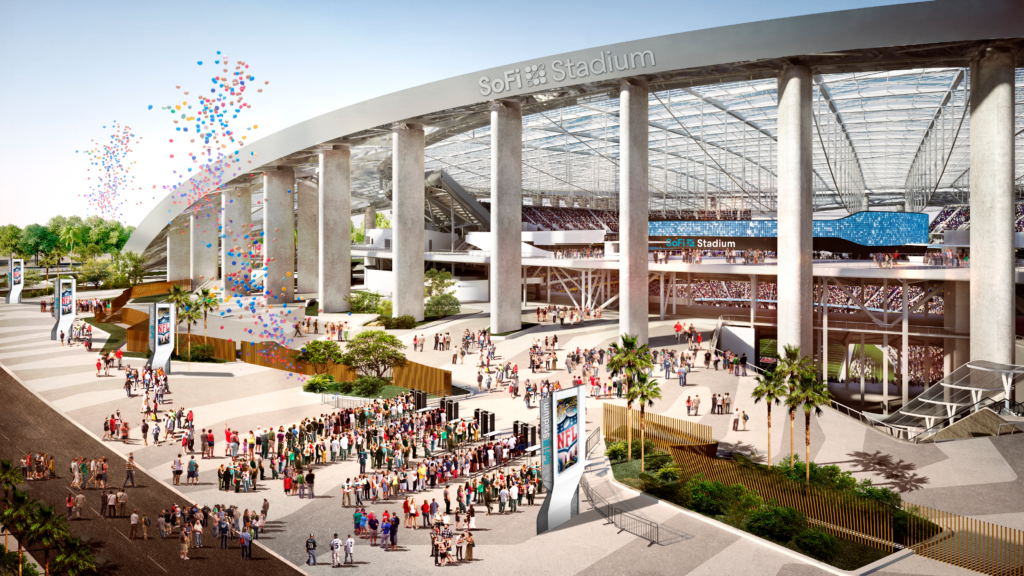 SoFi Stadium may be the most technologically advanced venue in the world. Designed by HKS, the stadium has a translucent roof that covers not only the stadium but American Airlines Plaza as well. Those who have toured the stadium can attest to the indoor/outdoor stadium.

Another distinction is the double-sided HDR video board “Oculus,” which will hang over the field with 260 speakers in the structure. The 2.2 million-pound structure recently completed construction and is 120 yards long.

“The size and scope of our center-hung video board, over 70,00 square feet, 4K technology — it’s unlike anything in sports today,” Gannon said.

Between the Oculus and all the video ribbon boards around the stadium, an attraction for event organizers is that the stadium “can deliver a blank building for an event that has their own sponsors and do not have to worry about covering up things,” Schloessman said.

And with the stadium close to completion and a series of major events lined up, that does not mean the schedule is finalized. Los Angeles will almost assuredly be a host city for the 2026 FIFA World Cup and SoFi Stadium, along with the Rose Bowl, is in the running as a potential venue.

“The phone has been ringing a lot in our office the past couple of years once they realized what this stadium is offering for a lot of different events,” Schloessman said. “Now our challenge is fitting everything into the calendar.”