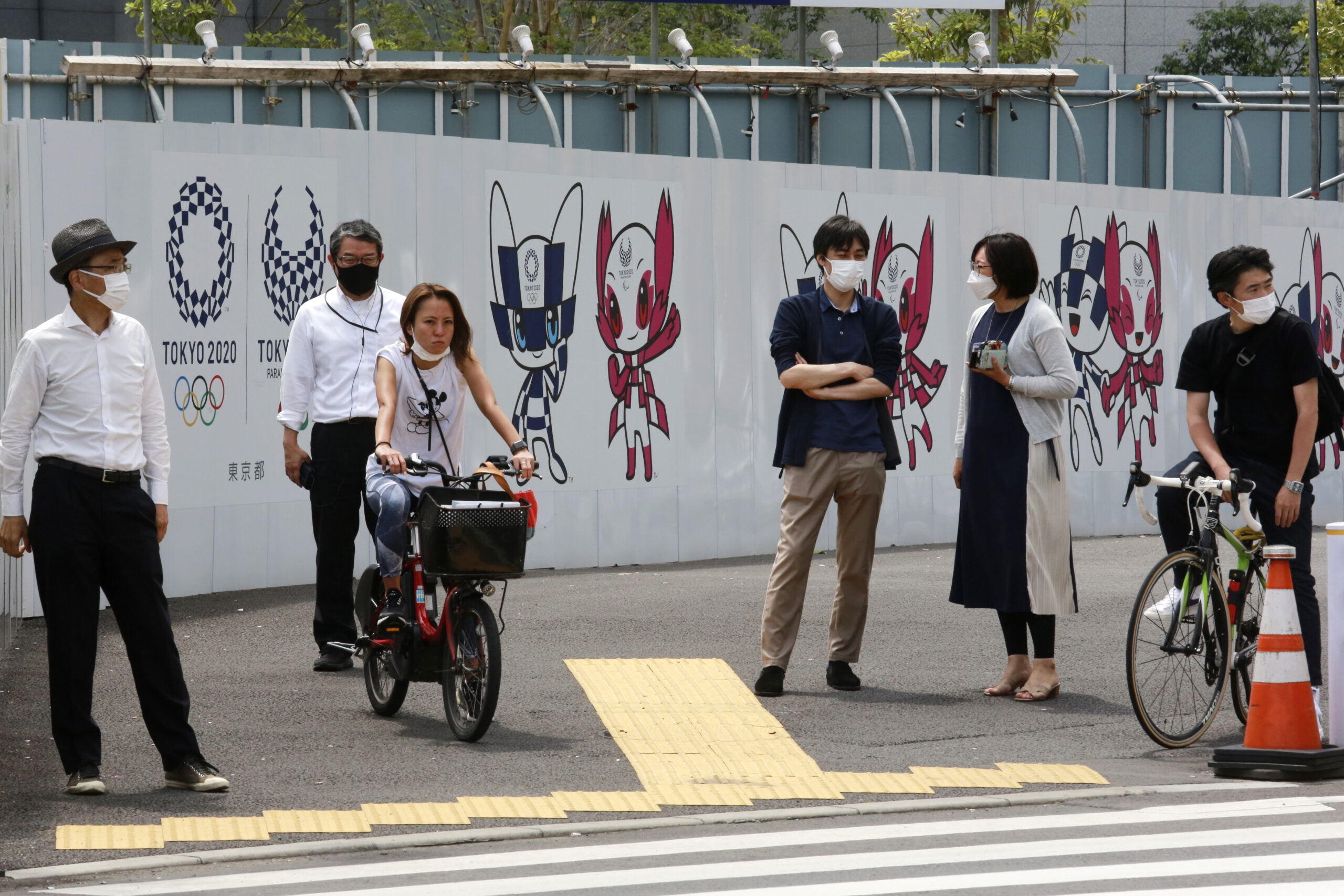 People in Tokyo stand by posters to promote the Olympic Summer Games scheduled to start in July. (AP Photo/Koji Sasahara)

Pressure continues to mount on Tokyo 2020 and the International Olympic Committee, both of which are proceeding ahead with planning for the Olympic and Paralympic Games this summer despite growing criticism on several fronts.

“We cannot think it’s rational to host the Olympics in the city this summer,” the newspaper wrote. “Distrust and backlash against the reckless national government, Tokyo government and stakeholders in the Olympics are nothing but escalating. We demand Prime Minister Suga to calmly evaluate the circumstances and decide the cancellation of the summer event.”

The editorial comes as the IOC has been tasked with defending its plans on a near daily basis as opposition grows in its host country, where COVID-19 cases are on the rise. A recent online petition calling for the cancellation of the event has now been signed by nearly 400,000 Japanese citizens.

As recently as Friday, IOC Vice President John Coates said “the answer is absolutely yes” that the Games would take place even if Tokyo remains under a state of emergency that could be extended to the footprint of the event.

Organizers also received another rebuke in the medical community this week, with the New England Journal of Medicine calling the IOC’s COVID-19 “playbooks” inadequate in their mitigation approach. The IOC has published several playbooks for each stakeholder group, including athletes, coaches, international federations and media, that govern their activities on site and details the plans for testing for potential COVID-19 infections. A third and final version of those playbooks is expected to be published in June. Among the measures outlined in the playbook is the need for anyone traveling to Japan to receive two negative tests with 96 hours of departure, and submit themselves to testing upon arrival in Tokyo and again on a near daily basis during their stay in the country.

But in the piece published in the medical journal, researchers said the published measures so far do not go far enough to prevent the spread of the virus. The article noted that when the IOC postponed the Tokyo Olympics in March 2020, Japan had 865 active cases of COVID-19 while the number of cases known worldwide was 385,000. Today, Japan has more than 17,000 cases with more than 19 million registered globally.

“We believe the IOC’s determination to proceed with the Olympic Games is not informed by the best scientific evidence,” the authors stated. “The playbooks maintain that athletes participate at their own risk, while failing both to distinguish the various levels of risk faced by athletes and to recognize the limitations of measures such as temperature screenings and face coverings. Similarly, the IOC has not heeded lessons from other large sporting events. Many U.S.-based professional leagues, including the National Football League, the National Basketball Association, and the Women’s National Basketball Association, conducted successful seasons, but their protocols were rigorous and informed by an understanding of airborne transmission, asymptomatic spread, and the definition of close contacts. Preventive measures, adapted amid continuous expert review, included single hotel rooms for athletes, at least daily testing, and wearable technology for monitoring contacts, supported by rigorous contact tracing.”

The playbooks, the piece continued, should distinguish between riskier events, which include indoor events where air circulation could be compromised. The documents, authors said, should also address differences among venues, including noncompetition spaces such as smaller, enclosed spaces where many athletes congregate, including stadiums, buses, cafeterias and hotels.

While IOC officials have defended the playbooks, on Wednesday, Tokyo 2020 announced that it would host an “expert roundtable” on Friday to dive into the proposed COVID-19 countermeasures planned for the Games. Details on who would be involved in the roundtable were not released, but Tokyo 2020 said the discussion “will be hosted in order to obtain guidance on specific measures that can be implemented in order to prevent the spread of COVID-19 during the Tokyo 2020 Games and allow these to be held safely and securely.”

A few days after the International Olympic Committee made it clear that the rescheduled Olympic and Paralympic Summer Games will be held in Tokyo, the United States State Department and federal health officials warned Americans against traveling to Japan because of a recent COVID-19 surge in the country.

The State Department’s warning was blunt: “Do not travel to Japan due to COVID-19,” it said in the announcement.

The alerts do not ban U.S. citizens from visiting Japan. Tokyo organizers had already announced that foreign fans would not be allowed at the event but there would still be hundreds of athletes, coaches and support staff that would be traveling this summer along with media.

“We feel confident that the current mitigation practices in place for athletes and staff by both the USOPC and the Tokyo Organizing Committee, coupled with the testing before travel, on arrival in Japan, and during Games time, will allow for safe participation of Team USA athletes this summer,” the United States Olympic and Paralympic Committee said in a statement Monday.

Japan has put Tokyo, Osaka and several other areas under a state of emergency until May 31 that is likely to be extended. Only up to 4 percent of Japan’s population has been vaccinated; Japanese Prime Minister Yoshihide Suga has pledged to finish vaccinating the country’s 36 million older people by the end of July. Japan mobilized military doctors and nurses to give shots to older adults in Tokyo and Osaka on Monday.