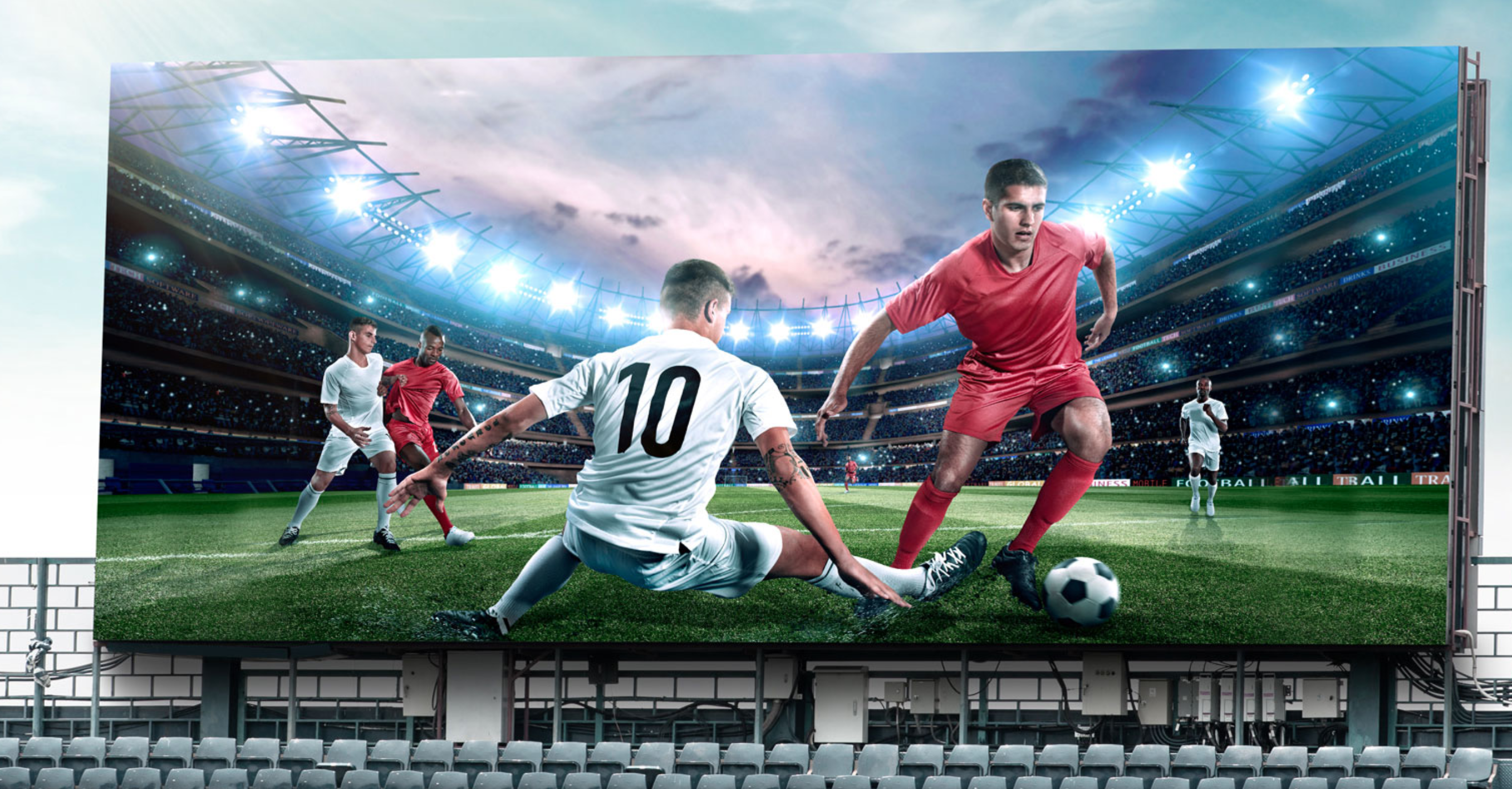 When arena and stadium operators first began using direct view LED (or DVLED) displays for their scoreboards, they represented the apex of digital display technology. Today, innovative engineers and manufacturers have pushed DVLED display technology to once-unimaginable heights, with individual LEDs (or pixels) now being produced at sub-millimeter size and enabling the design of ultra-high-definition video displays in nearly any size or shape with performance equal or superior to any other technology.

The original monochromatic DVLED signs were used in a variety of situations and locations where text was valuable, such as scoreboards and Jumbotrons where arena/stadium operators could display scores and stats, and that basic design remains an effective eye-catching piece of technology with copious uses more than 50 years later.

Focusing purely on the technology, these displays’ “resolution” has remained on par with light bulb-based signs, and text-only functionality was standard for several decades. As manufacturers and researchers made use of new color options, developed multi-colored DVLED signs and integrated computerized control, new operations such as basic graphics and the illusion of moving text or images revolutionized the value of the technology.

As with many technologies, the devices shrunk in size and grew in capability as the decades passed, adding more sophisticated controls, delivering new possibilities and eventually becoming quite ubiquitous throughout arenas and stadiums. From menu boards to giant concourse displays, direct view LED is now used virtually everywhere a fan can look.

Fast forward to 2021 and the evolution of DVLED displays and technology is striking. While the intervening decades saw the popularization of cathode ray tube televisions and computer monitors, multi-bulb and eventually laser projectors, and the indomitable “flatscreen” technologies of the 2000s and 2010s, the latest DVLED innovations are introducing significant performance benefits and rewriting the rules of where and how any content can be shared in a sports setting.

Currently, one of the biggest advantages of DVLED technology is the ability to customize the design to fit nearly any specific need, resulting in virtually unlimited size and viewing distance. Whether an arena needs a sharp, bright display that is 20 feet long and two feet tall or a stadium wants a round, triangular or otherwise custom-shaped video display, DVLED can do that. There’s virtually nothing that cannot be achieved with today’s DVLED tech, whether the need is indoors, outdoors, on a ceiling or floor, wrapped around columns or fitted to curved walls.

There’s virtually nothing that cannot be achieved with today’s DVLED tech, whether the need is indoors, outdoors, on a ceiling or floor, wrapped around columns or fitted to curved walls.

In addition to obvious customization options such as size, shape and brightness, the LEDs themselves, the tiny diodes that emit colored light, have advanced so far that millions of them can be packed onto single displays, offering custom resolution and pixel count. The cost of individual LEDs goes up as they shrink in physical size, so stadiums and arenas can maximize the value of their spending by determining the exact required resolution, size, aspect ratio and even curvature to meet their needs. With industry-wide LED costs and the cost of DVLED manufacturing falling reliably year-over-year, DVLED is an affordable option for just about any need.

Considering growing global trends toward eco-consciousness and extending product life cycles to reduce e-waste, DVLED technology offers another major benefit: typically the longest performance duration of any current display technology. In the top range of DVLED display products, manufacturers have successfully engineered such high-quality components that they are rated to last up to 100,000 hours at full brightness, and even longer at real-world usage brightness. For quick reference, 100,000 hours of operation would be 24 hours a day for more than 11 years. It’s no surprise, then, that DVLED displays are coveted for use in large sporting venues.

What the Future Holds

If current trends and needs continue, we may well find ourselves in a world where DVLED displays become as ubiquitous as flat-panel LCD displays are now. Throughout its evolution, DVLED tech has developed contrary to CRTs, LCDs and projection, starting out physically large and becoming smaller over time. The industry is at an inflection point where these displays are now becoming more competitive with LCDs in size, resolution, and even cost and installation simplicity.

When we consider the remaining benefits, which include energy efficiency, thin builds for large displays, high brightness capabilities and easily replaceable modules that eliminate the need for entire displays to be discarded when a single component fails, it becomes clear that continued DVLED research and development is a vital mission for the arena/stadium development industry.

One of the final remaining improvements to be made is simplifying construction and installation for DVLED displays. Many of today’s models require several days to install, configure, and integrate with digital video delivery systems. But fear not: The great minds behind all the advances discussed here are solving this problem and launching all-in-one DVLED displays that are easier to install and program.

If we zoom out and look at the full range of display technologies in operation and production today, DVLED has significant room for growth and innovation, and may even enable arena and stadium applications that have not yet been imagined.

Dan Smith is the vice president of business development at LG Business Solutions USA. He provides experienced leadership in sales and engineering to develop new markets and customer bases. By combining his technical, academic and practical knowledge with decades of market experience, he’s successfully led market operations since joining LG in 2010. For more information, visit www.LGsolutions.com.