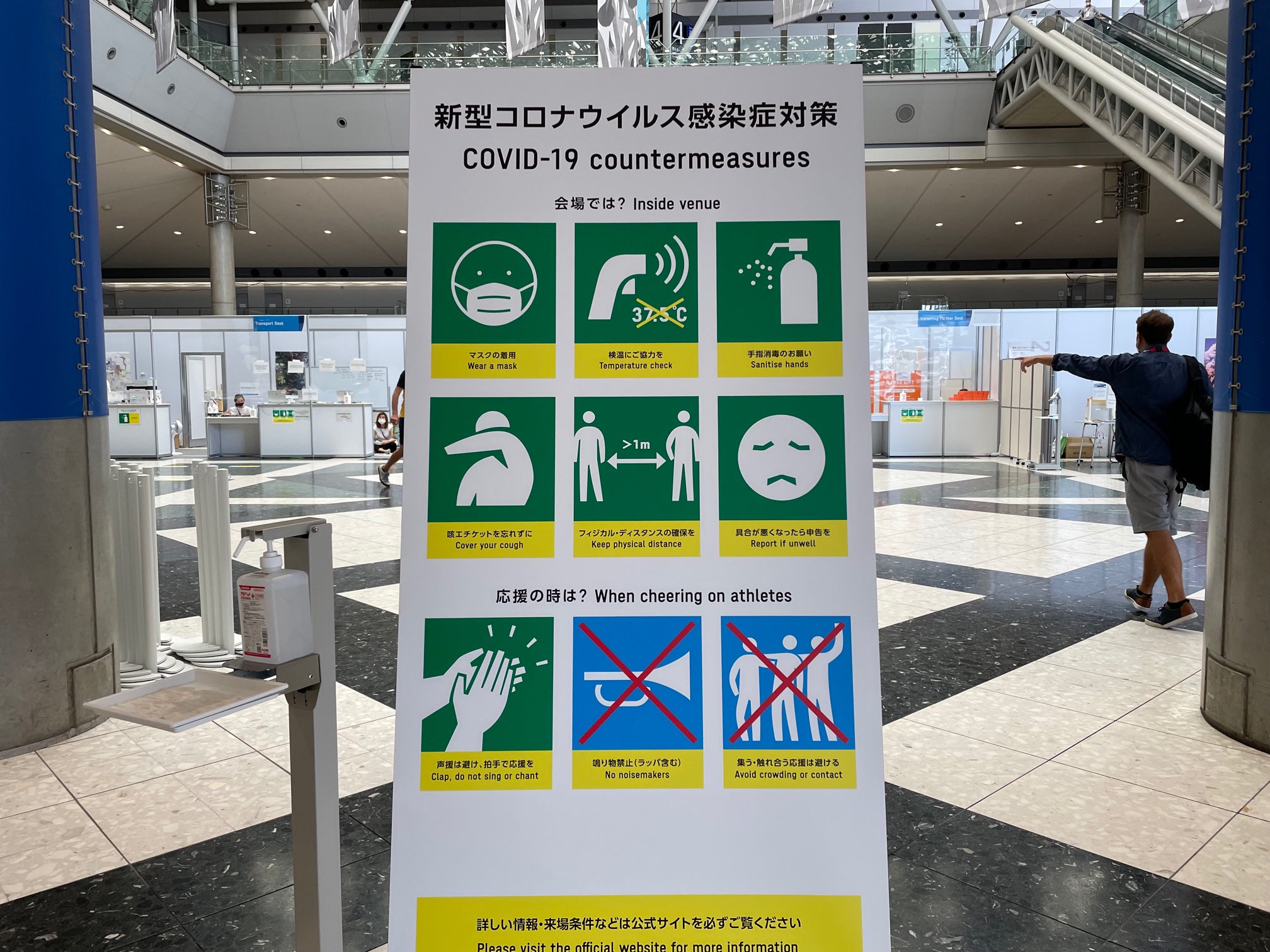 The Main Press Center in Tokyo for journalists covering the Olympic Games has signage reminding visitors the rules of engagement to battle COVID-19. Photo: Jason Gewirtz

For the second straight day, Tokyo recorded its largest number of COVID-19 cases since the pandemic began, with the city government reporting 3,177 positive cases. It’s the first time the city has recorded more than 3,000 cases in one day and mirrors a trend across several Asian nations in recent weeks that had otherwise had good track records keeping the virus in check.

But Olympics officials say cases related to the Games themselves continue to remain small. Masa Takaya, a spokesman for Tokyo 2020, said as of Monday, more than 38,000 tests have been conducted at incoming airports for Olympics visitors. Of those, there were 30 reported cases, for a positivity rate of 0.08 percent. When factoring in the total number of tests that have been conducted at venues and since people have been in Tokyo for the Games, there have been 270,000 tests with 57 positives, a rate of 0.02 percent.

At a press conference on Wednesday, International Olympic Committee Spokesman Mark Adams said organizers remain confident that despite the growing cases citywide in Tokyo and across Japan, the IOC is maintaining the integrity of its program to spot infections early and isolate those individuals.

“There’s no contact between the general public and the Games’ organizers on a day-to-day basis,” he said. “Our level of infection … this is not something we’re happy about, we need to keep working. But the WHO (World Health Organization) said it’s not actually necessarily about the level of infection, but it’s what you’re doing. And you’ve seen the measures we’re taking.

“The questions of masks is really important and particularly for the perception. That’s why we’ve made it very clear this is a must-have. All the groups have been communicated to, in the venues as well.

“What should give people a real measure of confidence in the general population is all the amazing measures that we’ve been taking. The Olympic Village, again, is the most tested-community everywhere in the whole world.”

Meanwhile, organizers said they are dealing with another issue: what to do with all the food that had been ordered at concession stands across the venues that is going unused.

“We can confirm it has been the case, with food not being consumed compared to the amount that we ordered from the suppliers,” Takaya said. “From this week we took measures to optimize the volume of food at each venue. We regret the large amount of over-ordering until now, but that food hasn’t been disposed but recycled into animal food and bio gasses.”