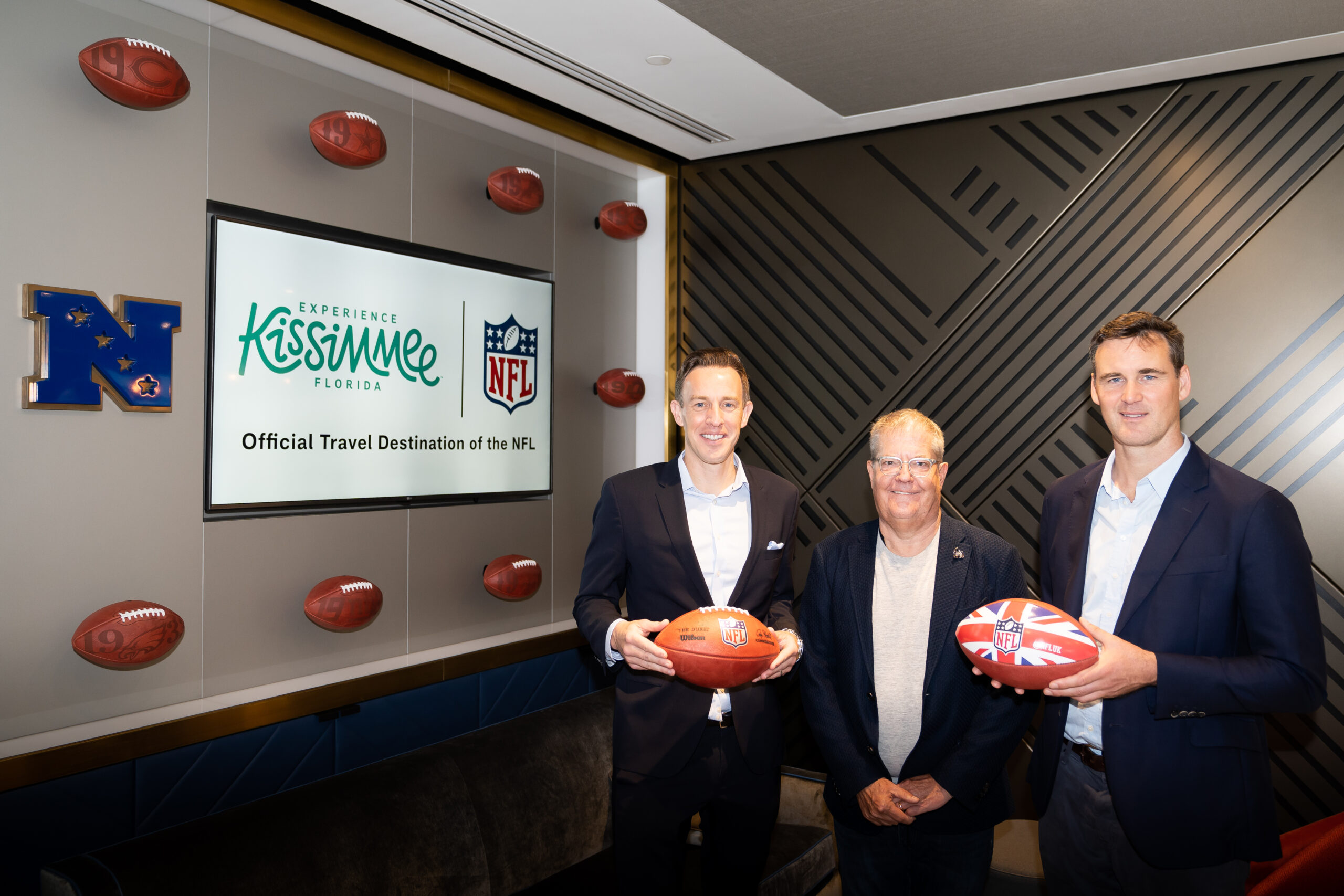 As a six-year partnership with the Premier League’s West Ham United ended this spring, Experience Kissimmee and the Kissimmee Sports Commission started exploring the chance to have a new international presence that would allow them to continue promoting the Florida destination to as many corners of the world as possible.

“We are very pleased to be partnering with Experience Kissimmee,” said Henry Hodgson, managing director of NFL UK. “Together we can create some exciting opportunities to connect with new audiences and to expand the sport.”

Kissimmee will have exclusive branding for the games October 2 between Minnesota and New Orleans; October 9 between the New York Giants and Green Bay Packers; and October 30 between the Denver Broncos and Jacksonville Jaguars. The first two games will be at Tottenham Hotspur Stadium while the third game is at Wembley Stadium.

“We’ve been really strategic in moving toward the NFL because the October time frame is really important for us in the UK market,” Kissimmee Sports Commission Executive Director John Poole said. “That’s when a lot of people in the UK are planning to book their vacation at that time. We think it’s going to be really powerful in that sense.”

The deal with the NFL in the UK will offer Experience Kissimmee marketing opportunities inside both Tottenham Hotspur Stadium and Wembley Stadium, as well as online digital assets. In addition to the NFL London Games, Experience Kissimmee will support the NFL UK Flag Football program, which is in more than 380 schools. There’s also Super Bowl tickets Kissimmee will be able to auction off as a fundraiser.

“We are truly excited to partner with the NFL on their London Series,” said DT Minich, president and chief executive officer of Experience Kissimmee. “The United Kingdom has been and continues to be our largest international market with more than 800,000 visitors to our destination in 2019. This opportunity will further our reach with our great visitors from the UK but will also enable us to connect with key markets across the United States.”

But the ability to use the London games to go beyond that location also resonates with the organization.

“Like West Ham, like some of our other partnerships, it’s not just the UK market that’s watching those games,” Poole said. “Throughout Europe, the NFL is a big deal and that it’s in their time zones and geared toward their time zones is huge for us.”

As its partnership with West Ham United wound down, Poole went to the UK and met with 14 potential partners and felt “the NFL made the most sense from a commercial standpoint and brand awareness standpoint. I like the fact that it had not truly been done before from a U.S. destination standpoint.” There remain other international partnerships that Kissimmee could do down the line whether it be Latin America or an emerging market such as India.

The games give Kissimmee the chance to expand its brand recognition throughout Europe and in the markets for the teams that will be playing in London. “The NFL is a neutral brand and it represents many teams and we get exposure to multiple markets in one go rather than being affiliated with West Ham United,” Poole said. “We get that exposure not just in the UK but domestically in the U.S.”

It also has a personal appreciation for Poole, a Brit who will enjoy seeing his organization’s branding during all the London games but in particular the pair played at Tottenham Hotspur Stadium, home of his favorite Premier League team.

“The stadium is unbelievable,” he said. “It’s one of the finest venues in the world and obviously they have a great Premier League team playing there, they have the NFL there. To have our branding at one of the most state-of-the-art venues in the world is unbelievable for us. There definitely is a sense of pride. To have that platform and have all those people looking at our brand each weekend in October is fantastic for us.”