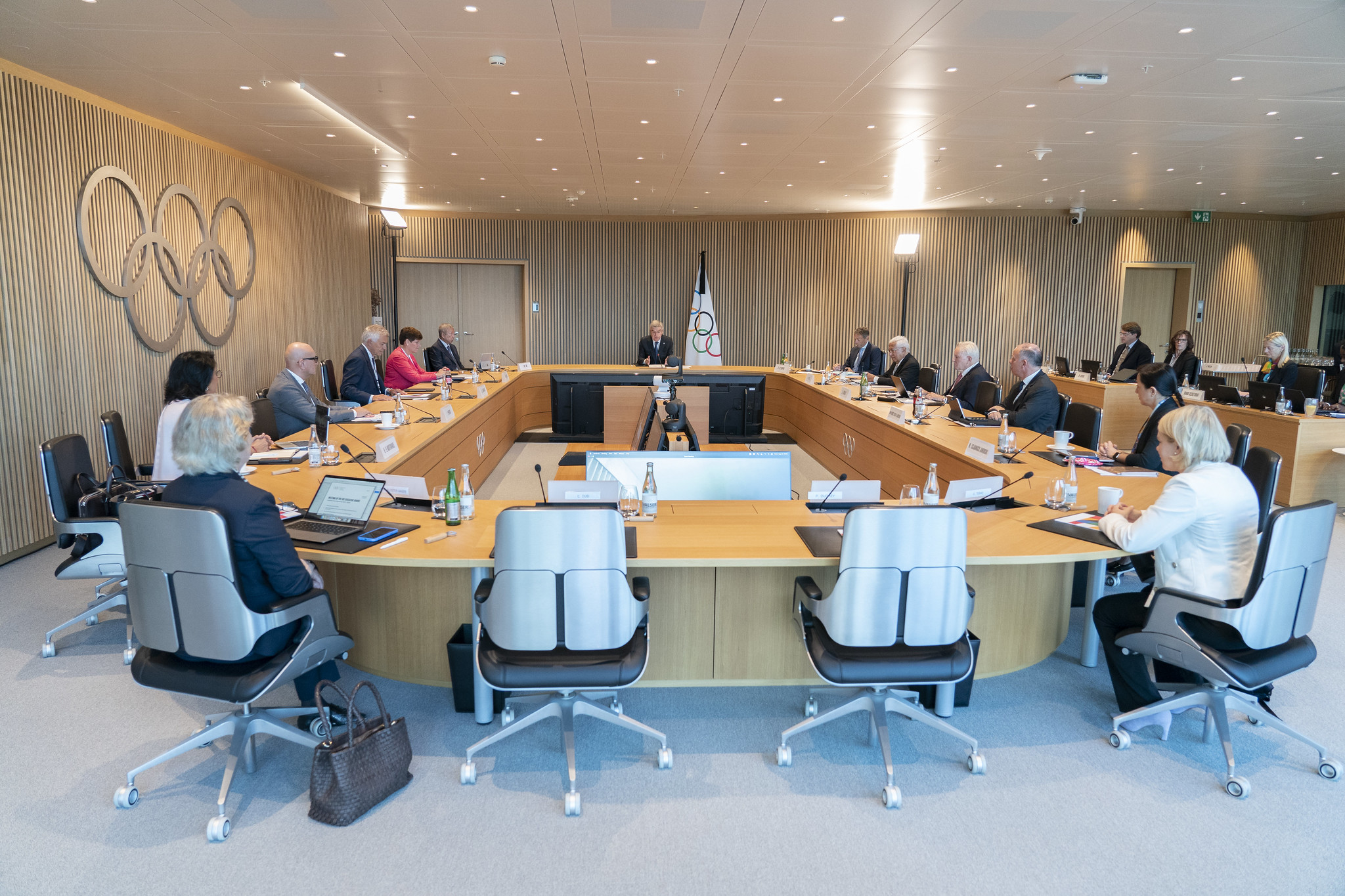 The IOC Executive Board holds its second day of meetings on September 9, 2022, in Lausanne, Switzerland. Photo via IOC

There are three Olympic Games between Summer and Winter editions over the next six years but after two days of the International Olympic Committee’s executive board meetings, one takeaway more than any other is center stage — and it’s for a Games that does not yet have a host.

Here are five takeaways from what has developed recently on the Olympic scene.

One thing is clear after the past week: Salt Lake City is the safest bid for the 2030 Winter Games and yet the IOC is giving the two other candidates all the time they need to get things straightened out with an eye toward giving one of them the Games instead.

In Sapporo, Japan, the mayor’s visit to the IOC suddenly was cancelled as recent allegations of bribery against members of the Tokyo 2020 organizing committee and its partners gained broader attention. And there is something to be said for how Sapporo Mayor Katsuhiro Akimoto and Japanese Olympic Committee President Yasuhiro Yamashita feel the need to publicly make a joint commitment to ensure the bid is free from corruption given the developments.

Vancouver’s bid is the first led by the Indigenous community, which makes it extremely attractive from an altruistic point of view for the IOC — especially after the 2022 Games in Beijing. But the IOC has financial requirements of a host and the Vancouver bid is still awaiting word on if it will receive provincial support — without which its bid becomes extremely difficult to execute.

So when you’re the IOC, and you’ve told the world that you’ll have a candidate for “targeted dialogue” in December for 2030 with a view toward formal approval at the General Session in May, and two of your three potential bidders are struggling to get things straightened out … you give yourself wiggle room on the deadline and postpone the General Session until September 2023.

That last comment is proving prescient. Throughout Salt Lake’s candidacy, the big issue was the short turnaround from LA28 from a commercial standpoint. But according to Olympic observers, Lyons’ earlier comments about the IOC’s unhappiness with U.S. politicians before the 2022 Games are more than words — it accurately reflects the IOC’s still-angry feelings toward Washington, D.C.

What we have here is a bit of a poker game. The IOC is betting that by extending its timeline to decide on a host, Sapporo and Vancouver will get on track and it will be able to pit multiple bidders against each other to get the best deal. But there is a case to be made for streamlined costs in having two Games in the U.S. in an 18-month period as the IOC makes a public show of lowering the cost of hosting the Games. And if Sapporo and Vancouver do not get on track, all the delays in the world can’t make the IOC delay the inevitable.

The framework could be well-intentioned, but the timing of its release is curiously timed on the heels of the 2022 Winter Games in Beijing — and IOC President Thomas Bach remains unrepentant. When asked for his thoughts on the United Nations report that criticized China on “serious human rights violations [that] have been committed” against Uyghur Muslims and other ethnic minorities, Bach replied “the IOC worked together with the organizing committee to ensure all the obligations of the host city contract were met.”

Translation: We got our money and we won’t apologize for how we got it. To act now as if human rights is important to the IOC is scarcely believable.

The IOC and Paris 2024 organizers have “found more efficiencies,” said Executive Director Christophe Dubi. “We are down to minor details and the certitude is that we will produce further savings without compromising the experience and the amibitions of these Games.”

A tale as old as time: Olympic Budgets Going Bonkers. To quote Albert Einstein, the definition of insanity is doing the same thing over and over and expecting different results.

Surprisingly, Bach did not receive one question about the IOC’s stance on Russian and Belarussian athletes. Six months after Russia invaded Ukraine and the IOC called for the exclusion of athletes from Russia and Belarus from international competition, those bans remain the policy. With qualification events scheduled, there remains the possibility that athletes could be banned from Paris 2024.

It seems as if the IOC’s early stance was built on being able to catapult itself as the “world sports leader” by taking a stand against Russia while believing the invasion would not last long. Should it continue, the IOC would be in the right to ban athletes; however, it will need a good explanation for why in this situation athletes are banned when at previous Games, athletes were not punished for a country’s clear doping issues — especially given the IOC’s past “we’re not political” stances.

Cities thinking of bidding for the 2036 Summer Games range from Munich, Germany, to Saudi Arabia (which is a country, not a city, and whose ambitions may be interesting given the new IOC human rights policy).

One question: Why not limit it to a city and let an entire country — or countries — bid? FIFA expects the 2026 World Cup co-hosted by the U.S., Mexico and Canada to be its most profitable yet and already its 2030 World Cup bid pool includes joint campaigns from Spain and Portugal, a four-country bid from South America and a reported three-country bid between Saudi Arabia, Greece and Egypt.

The IOC will say having an entire country host instead of a city spreads the Games out too much. But given its also new-found realization that climate change could make it too hot in the summer and too mild in the winter to host future Olympics, and the potential that a country would have the infrastructure to handle hosting the Games more efficiently than a city could budgetarily, thinking outside the box would not be the worst thing that the IOC could do.