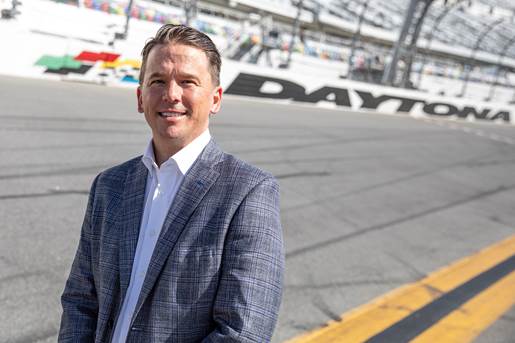 Kelleher previously served as NASCAR senior vice president and chief sales officer where he oversaw a team responsible for business strategy and revenue generation. He also played a key role in media and partnership ales for NASCAR and its tracks. He will become the ninth president in the historic track’s history.

“For nearly two decades, Frank has demonstrated the ability to foster meaningful relationships and lead critical areas of our business,” said Lesa France Kennedy, NASCAR’s executive vice chairperson. “He is a dedicated member of the greater Daytona Beach community, a true team-builder, and most importantly, he has a deep-rooted passion for motorsports and promoting the fan experience. We are incredibly excited to have Frank leading Daytona International Speedway.”

“I am incredibly honored to take on this historic role and represent the most iconic motorsports venue in the world,” said Kelleher. “Our race fans are what makes working in motorsports so special and I’m excited to work with the tremendous team at Daytona International Speedway to continue to deliver a best-in-class racing experience for our fans locally, nationally and around the globe.”

During his tenure as president of DIS, Wile oversaw promotion and operation of the track, including a massive renovation and a push to bring in new events to the venue. Prior to Daytona, Wile was president of Darlington Raceway in South Carolina.

“Chip has played a tremendous role in guiding the success of two of our flagship racetracks in Daytona International Speedway and Darlington Raceway,” said NASCAR President Steve Phelps. “Always looking to deliver for our incredible fans, Chip’s constant desire to improve and drive innovation will serve our sport well in this new and important leadership role.”