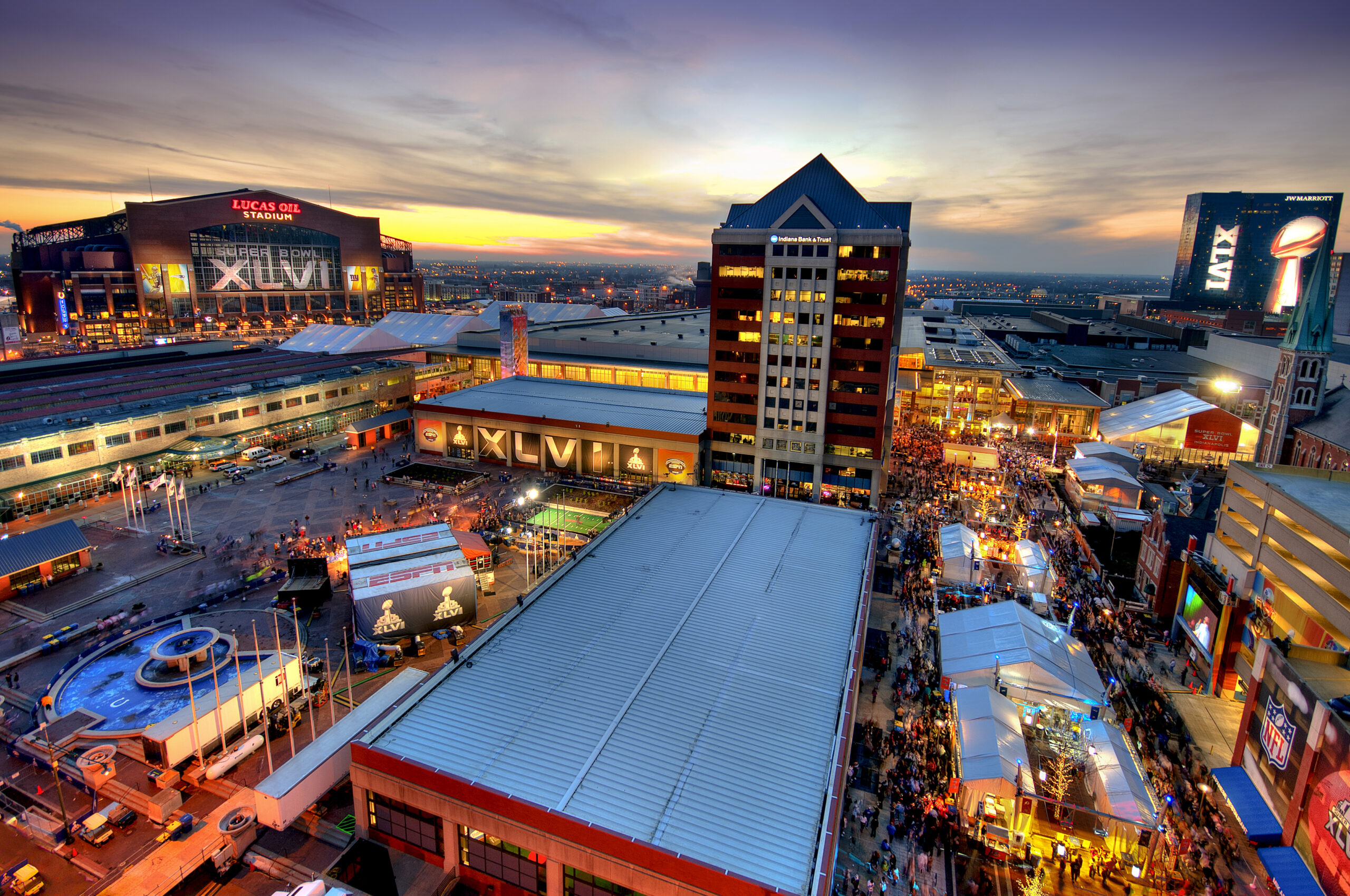 A conscious effort by city leaders in Indianapolis to create a concentration of sports venues and hotels in downtown has paid off with large events over the years. (Photo: Visit Indy)

The NCAA started calling in the fall. In an effort to cut down on team travel during the COVID-19 pandemic, would Indianapolis — which was set to host the 2021 Final Four — be interested or willing to host the entire Men’s Division I Basketball Tournament?

The answer, of course, was yes.

But the delay between November 16, when the NCAA and the city said they were negotiating, and the January 4 announcement that the deal was done was the result of the city needing to renegotiate with several groups already booked at the Indiana Convention Center — a key potential practice facility. In addition to those groups’ commitments, there was also the matter of rooms booked in at least five downtown hotels that would be crucial to house all 68 teams and their traveling parties for the tournament.

“We literally don’t have a dark week at our convention center until the end of the year,” said Leonard Hoops, president and CEO of Visit Indy, whose organization worked with the Indiana Sports Corp and other entities to negotiate the deal that was recently announced by the NCAA. While everyone wanted the make something work, Hoops noted that “the NCAA had other options if we couldn’t pull it off.”

All sides were able to come to an agreement, which will see the tournament staged at four sites in Indianapolis, plus the campuses of Indiana University and Purdue University less than an hour away. The Final Four will remain at Lucas Oil Stadium, home of the NFL’s Indianapolis Colts. For all games, including the ones held outside of the city, teams will stay in downtown Indianapolis hotels and have access to practice courts and weight rooms that will be constructed in the Indiana Convention Center.

The story of how Indianapolis was able to close the deal is one of negotiation with the groups that had already booked the convention center and various hotels throughout March.

When the first calls came from the NCAA, Hoops said he knew Indianapolis would be an ideal location. The city was already prepping for its latest turn as host of the Final Four and since the NCAA is headquartered in downtown Indy, the collegiate association was intimately familiar with the city’s downtown footprint. But perhaps the most compelling component for the NCAA was that the city has 12 downtown hotels connected via skywalk to the convention center and to Lucas Oil Stadium, making Indianapolis as conducive as any city to provide a controlled, bubble-type environment during the pandemic.

A key component early on was the convention center. While games won’t be played there, the plan was to use the exhibit hall to house 11 practice courts that the NCAA would install, plus weight rooms that would be constructed. Breakout rooms would also be needed for team meetings for all 68 teams expected to play.

“There were a lot of working parts to make the convention center available,” Hoops said. When the public announcement was made in November that the NCAA was negotiating with the city, no contracts had yet been adjusted for existing clients. “But we mutually felt we had what they needed to get it done,” Hoops said.

While Hoops declined to say which groups were booked at the center, he said several of them were already looking to go virtual with their conferences or were willing to reschedule to new dates. Other groups were more difficult to rebook, especially as it related to their hotel contracts. “The customer wants the best deal possible; the business partner wants the best deal,” Hoops said. “It took a while to find a mutually agreeable best deal.”

Attendance will be limited at early rounds, and no decision has yet been made on the Final Four. But under rules announced last week by the NCAA, each team will be allowed a delegation of 35 participants, which includes players and coaches. Each of those will be allowed up to six tickets for family members to attend the games, for a potential of 420 visitors per team. With a 68-team field, that could mean upwards of 20,000 people.

While those numbers will be welcome for the city, Hoops said, they don’t compare to what a host city might see if full attendance was allowed for that many games. But it’s also not an insignificant number. “It’s like a good-sized convention,” Hoops said. “But that starts dissipating pretty quickly.”

That’s because as teams are eliminated their contingents will go home, meaning the middle rounds will likely see the lowest numbers of visitors. But depending what the final ruling is on attendance at the Final Four, those numbers of course could rise. The Colts saw between 10,000 and 12,000 per game at Lucas Oil Stadium, leading to some hope that there will be fans allowed for basketball by the final tournament weekend in April once the NCAA negotiates those terms with local health officials.

Providing an even bigger impact than attendance, though, will be an unprecedented amount of television exposure. “We may get 500 to 1,000 hours of Indianapolis as the center of the sports universe where you get your bumper shots of the city and (broadcasters saying) ‘live from Indy,’” Hoops noted. “This may be one of those cases where nobody has ever had this much media value.”

As for protocols on site, each team will receive its own floor at one of the host hotels. Even teams that will play in Bloomington, Indiana, (home to IU) and West Lafayette, Indiana, (home to Purdue) will stay in Indianapolis. Other venues will be Bankers Life Fieldhouse (home of the NBA’s Pacers), Hinkle Fieldhouse (home of Butler University), Indiana Farmers Coliseum (home of IUPUI) and Lucas Oil Stadium. The NCAA will arrange a charter bus and/or air travel for all members of the Tier 1 group, which includes players and coaches.

The NCAA has said everyone in the Tier 1 group will need to demonstrate that they have had seven consecutive negative COVID-19 tests before arrival into Indianapolis. The NCAA plans to work with IU Health to provide health-related support, including the administration of PCR tests for that Tier 1 group as they arrive in the city. Others in the Tier 1 group include athletic trainers, physical therapists, medical staff, equipment staff and officials.

“Our emphasis is on the safety and well-being of everyone participating in the event,” said NCAA Chief Medical Officer Dr. Brian Hainline, in a statement announcing the procedures. “By working with local health officials to develop protocols and administer COVID-19 testing, we are confident we will provide a safe environment for student-athletes, coaches, administrators and officials.”

In addition to masks being required outside of competition, players and coaches will be required to wear a KINEXON contact-tracing device to monitor their movements. Those devices will be worn during practices and games, and will allow the NCAA to track who has been within six feet of anyone who may later have tested positive. Quarantines may not be required if the exposure was less than 15 minutes over a 24-hour time frame, the NCAA said.

Despite the logistical challenges in reaching an agreement to host the entire tournament — and the inevitable challenges that may still lie ahead — Hoops said the opportunities for Indianapolis and the surrounding region are endless. While the five hotels that have been contracted for the Tier 1 group will see significant business, the second tier of sponsors, media and others will also provide a welcome boost for room nights. And if fans are allowed into the Final Four, the benefit could be even greater.

Still, Hoops said, the region is aware that 13 cities have lost out on their turn to host early rounds. While Indianapolis has seen success bringing groups to town, the city has not been immune to lost events. The NBA, for example, pulled the 2020 All-Star Game from the city last season, providing Indianapolis will a sense of how quickly things can turn.

But for now, given the need to keep this season’s NCAA tournament in one spot, Hoops is glad the city was able to work something out for all involved. “This is going to be memorable,” he said, “if for no other reason than it will never happen again.”