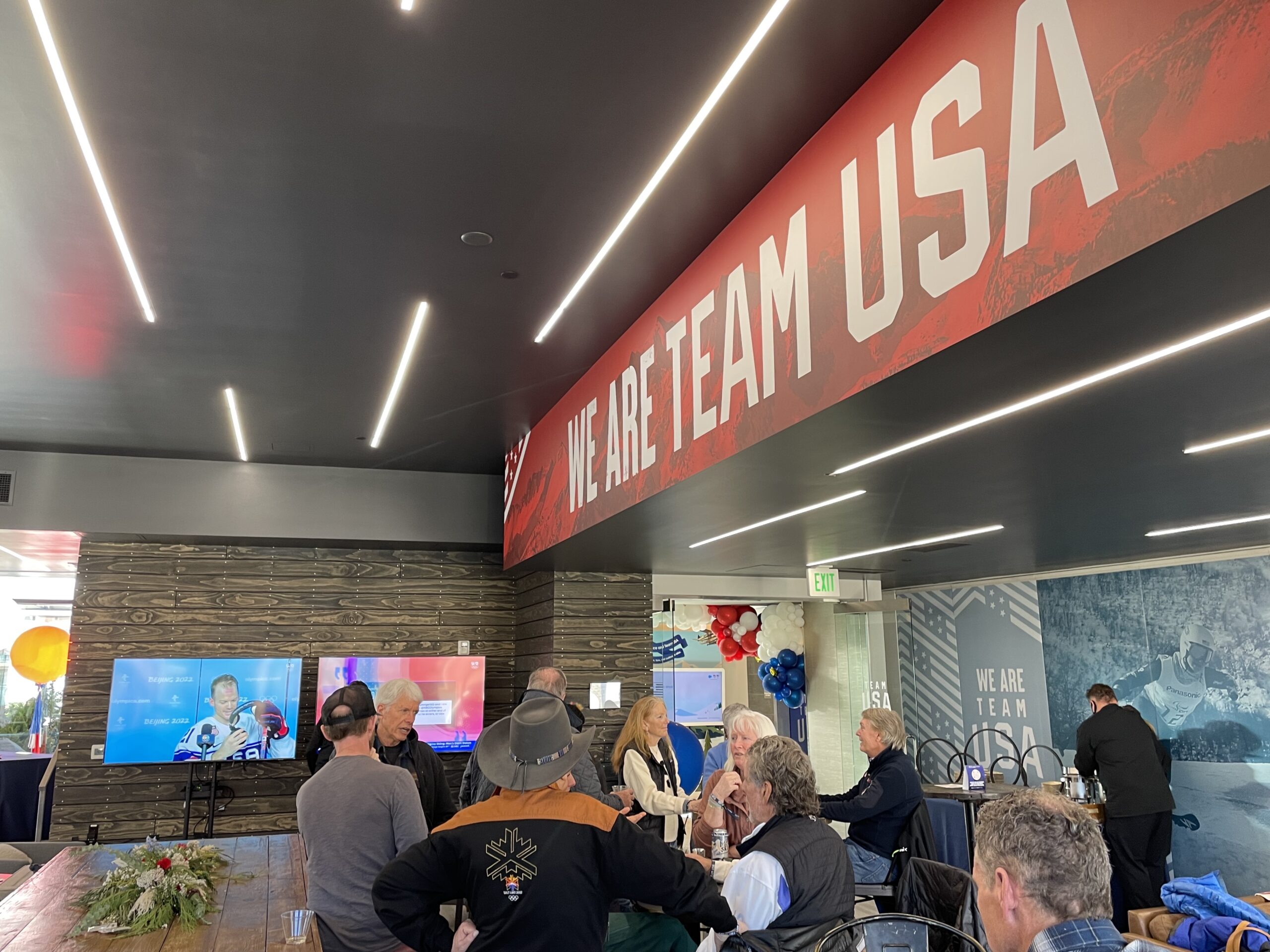 When Beijing’s organizers decided to ban foreign spectators from attending the 2022 Olympic and Paralympic Winter Games, it shone an even brighter spotlight on a previous host — with many hoping that it can repeat those hosting duties in the future.

Families have descended for watch parties every night in Park City, Utah, where the region is not only celebrating the local athletes competing in Beijing but the 20th anniversary of the state’s hosting the Winter Games in 2002. And with the Salt Lake City-Utah Committee for the Games ramping up its engagement and preparation as a leading candidate to host the 2030 Winter Games, the ban on foreign fans in Beijing has resulted in even more attention paid to Utah than first planned.

“What we love is seeing the community embrace and activate both the history and their love for the Olympics,” said Calum Clark, chief operating officer of the Utah Olympic Legacy Foundation. “The 20-year anniversary has been really, really special. Both the volunteers and those who have moved here more recently have come here to soak up this vibe. It’s really special for our organization because we’re about keeping the Olympic legacy, and it shows here that the Olympic spirit is alive and well and thriving.”

Among the spotlight events was the relighting of the Olympic Cauldron at Rice-Eccles Stadium, where the 2002 Opening Ceremony was held. The celebration was led by Fraser Bullock, who was the 2002 Organizing Committee chief operational officer and is now president and chief executive officer of the Salt Lake City-Utah Committee for the Games. The new committee’s chair, Catherine Raney-Norman, was also among the speakers on the night the cauldron was re-lit, with the flame burning for nearly a full week and drawing hundreds on a nightly basis to take photos.

Saturday brought another group of invitees together to the Team USA House on Main Street in Park City, with a broader community event down the street. Attendees had the chance to try out simulated biathlon and curling exhibitions along with a climbing wall.

Inside the Team USA House, people gathered to catch up and exchange memories of Olympics past while the present was broadcast throughout the area. U.S. Senator Mitt Romney, who was the chief executive of the organizing committee in 2002, also stopped by to chat up several people and speak to attendees.

“I have come to believe that the real currency in life is the people you love and the people who you’ve made as friends,” Romney told the assembled group Saturday. “We had a group of more than 1,000 of us who worked together for three years. … All we cared about was producing the most successful Games in history. This group came together and produced these extraordinary Games that we feel a very deep and profound appreciation for.”

A small group from Salt Lake City’s candidacy group was scheduled to be in China as part of the Beijing 2022 Observer Program, but it was canceled for COVID-related reasons.

“We are interested in a Winter Games and depending on what the needs of the Olympic movement are, that could happen as early as 2030 or it could happen after that,” USOPC Board of Directors Chair Susanne Lyons said during a media briefing in Beijing before the Games. “Salt Lake City has all the venues already in place, they’ve hosted the Olympic Games before, they have very high excitement and support from their local population. Salt Lake City has made it clear to our partners at the IOC that they are ready and able to go as soon as we are needed.”

Hosting in 2002 has led to a surge of athletes with Utah ties participating in this year’s Games. Of the 222 members on the U.S. team, there are 80 either born in Utah, live and train in the state, and/or went to school there. The legacy for 2002 has been consistently repeated on broadcasts from Beijing; when Salt Lake native Nathan Chen finished his dominant victory in men’s figure skating, shortly after NBC showed video of a young Chen learning how to skate in an arena that was built in preparation for 2002.

That arena — like every other venue used in 2002 — is still in use and central to the athletic portion of Salt Lake’s 2030 candidacy, a testament to how the Utah Olympic Legacy Foundation has continued keeping everything operational.

“People like Colin Hilton and Fraser Bullock and others made sure that the money we left behind was used to keep the venues in tip-top shape and make this area, make Utah, the center for Olympic winter sport in all of North America,” Romney said. “I’m not surprised that Nathan, of course, who was born here, had the advantage of those facilities and that will be true for decades to come.”

Salt Lake City is one of four candidates for 2030 along with Sapporo, Vancouver and Barcelona. Each city has previous hosting experience although Barcelona’s was for the 1992 Summer Games, making it the weakest candidate in the field.

Sapporo Mayor Katsuhiro Akimoto said in the fall that hosting in 2030 would have a projected cost of up to $2.65 billion with about $700 million coming from taxpayers. Sapporo hosted the 1972 Winter Olympics and Akimoto said at least 92 percent of the venues exist although the cost of refurbishing them could be significant.

Catalan Government official Ricardo Font said Barcelona’s 2030 plans accept that sliding events would need to be held in either Albertville, France, host of the 1992 Winter Games, or even 1984 Winter Games host Sarajevo.

Vancouver, which hosted in 2010, could potentially be a tough regional competitor for Salt Lake City in the bid process. An agreement between four First Nations, the city of Vancouver, the Canadian Olympic Committee and the Canadian Paralympic Committee will include a feasibility assessment and initial concept development to bring the Games back to the Vancouver area.

Olympic observers are all trying to predict what the IOC’s Future Host Commission will do in picking a 2030 host. On one hand, having Sapporo host in 2030 would be seen in many ways as a make-good for the rescheduled 2020 Summer Games that were held in Tokyo at exorbitant cost to Japanese taxpayers and without the ability for fans to attend. But the way the IOC hoisted costs onto Tokyo led to widespread discontent within the country and politically, and those feelings may override any desires Akimoto would have.

The other main contender would be Vancouver, but its determination not to submit a formal bid until the fall gives the SLC organizers several months to press their case to get to the front of the line. While Vancouver’s pairing with the Four Nations would bring intrigue to the IOC, the most recent local survey showed underwhelming appetite to host in 2030.

SLC’s biggest disadvantage would being only two years behind the 2028 Summer Games in Los Angeles and how that would financially affect sponsorship revenue with another Games in the United States so close in time. Representatives from LA28 and the SLC bid are meeting with the USOPC on a near-daily basis to work on resolving any financial roadblocks.

Should financial agreements be made, Salt Lake’s case would become stronger to the IOC. Having consecutive Games in the U.S. could in theory be a strong commercial incentive for the IOC’s global sponsors. And having Salt Lake join the current lineup of Paris, Milan-Cortina and Los Angeles would potentially keep the IOC from falling into the type of geopolitical debates it did in Beijing, where leadup to the Games focused on intense global criticism of the host country.

“It’s increasingly important for the International Olympic Committee to consider the host nation and to stop giving the Games to authoritarian regimes,” Romney said Saturday in an interview with SportsTravel. “It’s an embarrassment for the Olympic movement to have it in Beijing, in my opinion, at the same time that genocide is being carried out against the Uyghur people and other minorities there. Having the Games in the U.S. or Canada or other free nations has to be the right course in the future.”

Next up then for the SLC candidacy is a spring visit to Lausanne, Switzerland, to meet IOC officials in person after having at least one trip postponed because of COVID-related surges. Until then, there is preparation locally and, for the remainder of the Games, celebration of both the legacy of 2002 and the potential for more memories to be made in 2030.

“For me the memories are profound because of the athletes but also those who helped create a great Games,” Romney said at the Team USA House on Saturday. “So, 2030 Salt Lake Games, I’m planning on being alive, hope you will be as well, and I’m looking forward to it.”