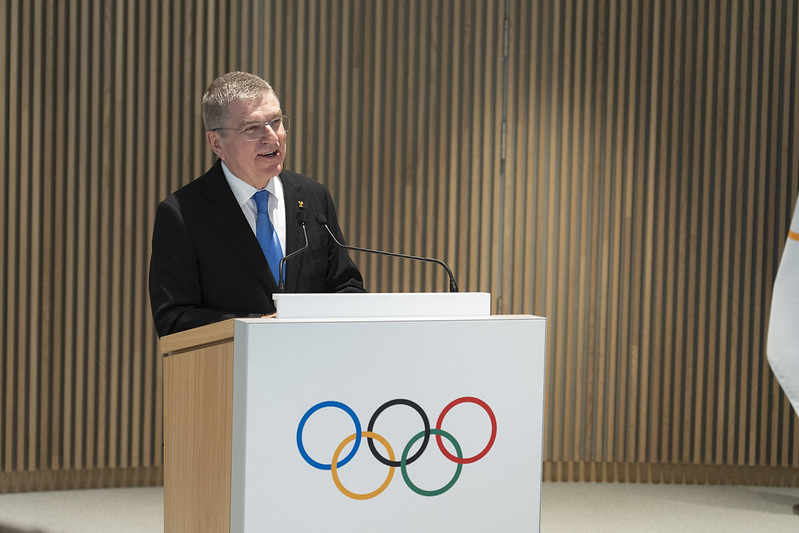 The International Olympic Committee has issued a statement that the organization “condemns racism in the strongest terms” and opened the door for athletes to express their feelings on the subject during a future Olympic or Paralympic Games.

The issue of athlete protests on the podium has been a controversial one ever since U.S. athletes Tommie Smith and John Carlos raised their fists on the podium at the 1968 Olympic Summer Games in Mexico City, a move that caused them to be ostracized for years from the Olympic movement. More recent protests at athletic competitions have been met with reprimands as the IOC has largely moved to keep such expressions off the podium. The Olympic Charter itself bars athletes from any “demonstration or political, religious or racial propaganda” during the Games.

But in a call with media after an Executive Board meeting, IOC President Thomas Bach opened with a statement on the IOC’s stance of recent events and discussions spreading worldwide in the wake of the death of George Floyd at the hands of police in Minneapolis.

“The IOC stands for nondiscrimination as one for the founding pillars for the Olympic movement,” Bach said. “The Olympic Games are a very powerful global demonstration against racism and for inclusivity. They are a celebration of the unity of humankind in all our diversity. Athletes from all 206 National Olympic Committees and the IOC Refugee Olympic Team all enjoy the same rights, respecting each other and with the same rules applying to everyone without any kind of discrimination.. … This is in the DNA of the Olympic Games and the IOC as an organization.”

Bach also said the IOC is supporting an initiative of the IOC Athletes Commission, which is working with athletes worldwide to discuss ways they can express their thoughts on the issue, possibly during the Games themselves. “The IOC Executive Board supports the initiative of the IOC Athletes Commission to explore different ways of how Olympic athletes can express their support for the principles enshrined in the Olympic Charter, including at the time of the Olympic Games and respecting the Olympic spirit.”

But whether that eventually includes permission for athletes to express themselves on the podium remains to be seen. Bach went on to say that by simply participating in the Games, athletes would be showing their proof of respecting nondiscrimination. “We also agree with the Athletes Commission that we must always respect the Olympic spirit and that means we must make a difference between support of the principles of the Olympic Charter and potentially divisive demonstration.”

The issue of systemic racism has also worked its way into the U.S. Olympic Committee as CEO Sarah Hirshland issued a statement about the organization’s approach to the issue. The statement was issued after town halls with athletes, who said they were not satisfied with the organization’s initial statements in response to the protests sweeping the nation.

In her new announcement, Hirshland said that she would create an athlete-led group to “challenge the rules and systems in our own organization that create barriers to progress, including our right to protest. We will also advocate for change globally.”

“The pain experienced by Black athletes and by the Black community — in recent weeks and for far too long before the murder of George Floyd — is unconscionable,” Hirshland wrote. “Your courage is inspirational. For decades you have spoken about equality and unity and sacrificed your moment on the podium for change. And we have failed to listen and tolerated racism and inequality. I am sorry. You deserve better. You matter. Black Lives Matter.”

Today, I am creating an athlete-led group to challenge the rules and systems in our own organization that create barriers to progress, including your right to protest. All Team USA athletes who are interested in participating are welcome. pic.twitter.com/uBnUV3WvEL— Sarah Hirshland (@USOPC_CEO) June 9, 2020

The USOPC has also seen controversy of podium demonstrations, most recently at the 2019 Pan American Games when fencer Race Imboden and hammer thrower Gwen Berry were put on probation for demonstrations on the podium. Imboden took a knee on the podium and Berry raised a fist, earning a reprimand from the USOPC. Last year, the organization began to bring Smith and Carlos back into the movement, inducting the pair into the USOPC Hall of Fame.