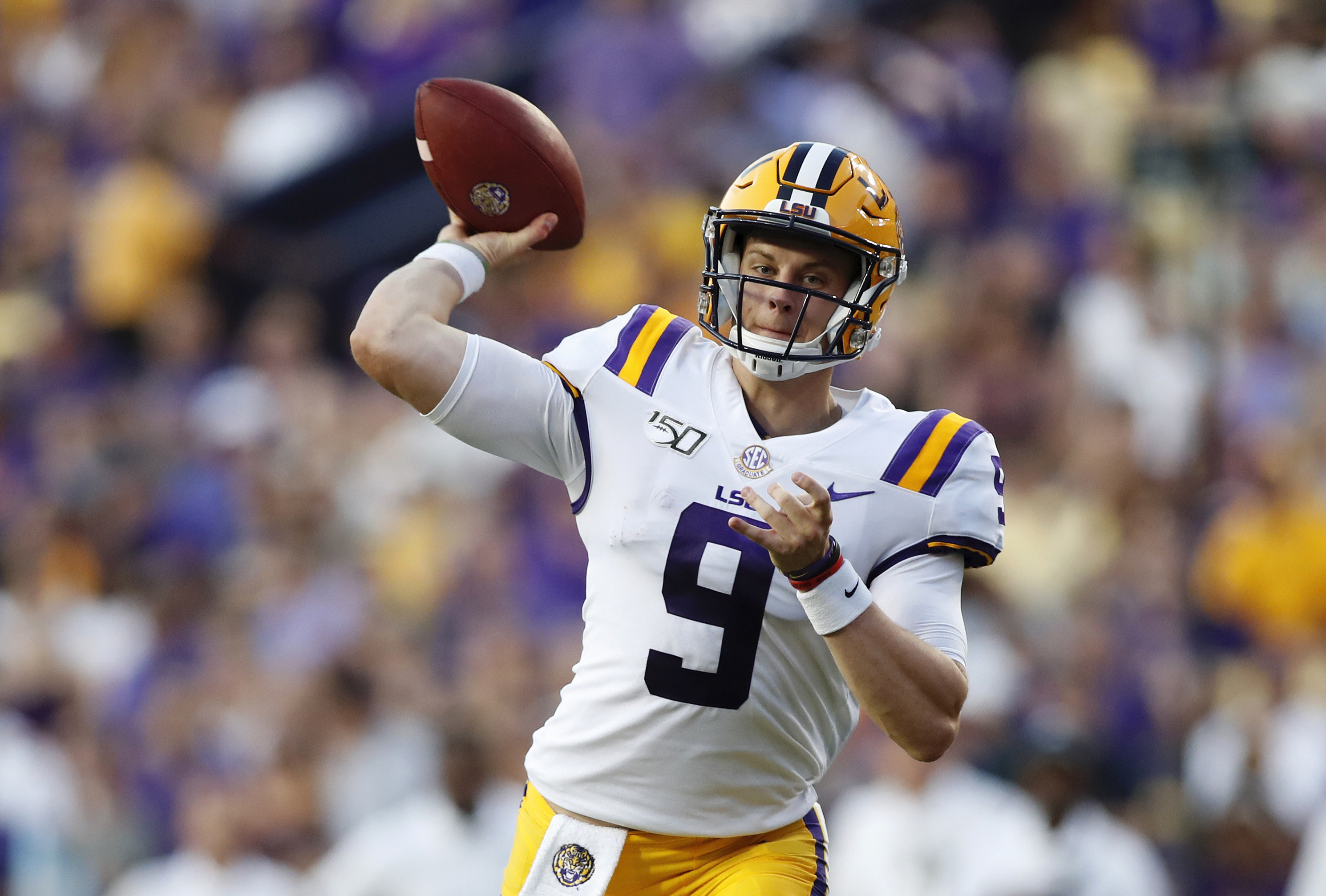 LSU quarterback Joe Burrows (9) throws the ball during a game against Georgia Southern this season in Baton Rouge, La. For the anniversary season, teams are wearing a “150” patch on their uniforms during select games. (AP Photo/Tyler Kaufman)

On the 2019 calendar at the Irving, Texas, office of the National Football Foundation, one date—July 8—was circled. Though that Monday marked the beginning of Major League Baseball’s All-Star break, at the NFF offices it meant only one thing: the official start of the 150th college football season.

The anniversary celebration is keyed to the first game of intercollegiate football, when Rutgers beat Princeton 6–4 on November 6, 1869. And this season, the game’s lasting impact will be celebrated in a variety of ways.

To explain the sport’s enduring appeal, NFF president and CEO Steve Hatchell invokes the phrase “the community of football.” While the players on the field draw most of the attention, the community also includes cheerleaders, bands, trainers, fans and everyone who contributes to the spectacle on the gridiron. “We think it’s a sport like no other in terms of the community, and people get to share in that,” said Hatchell. “You go back all those years and it’s one school against another, one city against another, it’s one part of the country against another and it’s all done without warfare. It’s all under the blanket of a game.”

The celebration of the 150-year milestone comes at a critical moment for a sport has seen its share of critical moments over the years, from changes to improve player safety to arms races among colleges seeking the best facilities to attract the best players. Attendance remains a primary concern. While attendance at games remains considerable—46.9 million people went to games in 2018—the numbers overall are on the decline, something the game’s stewards attribute to an increasingly competitive entertainment landscape.

The NFF hopes that dozens of events surrounding the anniversary season, as well as the creation of the CFB150 nonprofit to organize and promote those events, will serve as a reminder of everything that is great about the game. Plans include jersey patches, events at several neutral-site and on-campus games, displays at the College Football Hall of Fame in Atlanta and a “Week Zero” that highlighted the anniversary at the start of the 2019 campaign.

In July, the NFF gathered at the College Football Hall of Fame to unveil its plans for the anniversary celebration. The group highlighted artifacts from the game’s past, including dirt from the field where the first college football game was played between Princeton and Rutgers. The dirt samples are part of a special exhibit at the museum that will be on display all season.

For its role in history, Rutgers will be marking the season with special events at home games—including one honoring Rutgers great Paul Robeson—as well as the unveiling of a new statue celebrating the anniversary.

Princeton, meanwhile, will mark the 150-year celebration by shifting its November 9 game against Dartmouth to Yankee Stadium. (Princeton’s hopes this season are buoyed even more by 10–0 season last year, only the 13th unblemished season in Ivy League history.)

“We’re spending a great deal of time on that game, making it a full university celebration and bringing constituents from all parts of the university together in New York,” said Mollie Marcoux Samaan, the athletics director at Princeton. “We’re celebrating Princeton, Princeton athletics and Princeton football. It’s a multipronged, all-hands-on-deck approach.”

On signage around campus, Princeton has combined its logo with the logo of the CFB150 nonprofit group. “That logo is pretty much on all (Princeton) football publications this fall,” said Marcoux Samaan. “As you walk into the stadium, we have a field logo, which is a big deal for us. We have all sorts of banners and signs throughout the stadium.”

But Marcoux Samaan recognizes that this fall’s celebration is as much about the game’s future as its past. The Ivy League’s approach to the game isn’t the same as the approach of the Power Five schools trying to position themselves for a shot at the College Football Playoff, which enters its fifth season and culminates with the championship game in New Orleans on January 13, 2020.

More Than a Game

Building leaders has been a mission of college football from the beginning. General Douglas MacArthur, an original supporter of the NFF, has his name on the trophy presented annually to the national championship team. Last spring, Clemson players traveled to Atlanta to formally receive the MacArthur trophy that they earned by winning the championship at the end of the 2018 season. While at the College Football Hall of Fame there, they saw the desk where MacArthur worked when he lived at New York’s Waldorf Astoria Hotel. That desk is now on display at the hall, on loan from the hotel.

“MacArthur was a manager on the football team at Army for Red Blaik, who is not only legendary but he’s got more guys in the Hall of Fame than any other coach in history,” said Hatchell. “Football meant a lot to him.”

The 120th installment of the Army-Navy Game will be held December 14 at a sold-out Lincoln Financial Field in Philadelphia, four days after the 62nd NFF Annual Awards Dinner in New York City. “Football played at both of those academies was at the time cited as providing leaders, and not only for the military,” Hatchell said. “Guys who played football there went on to be presidents of the United States like Eisenhower or great generals—heroes in our society.”

The Army-Navy game will be broadcast on CBS, which kicked off its college football telecasts with the CFB150 Week Zero game on August 24 between Villanova and Colgate. ESPN had two telecasts during Week Zero—The Camping World Kickoff (Miami vs. Florida) in Orlando and the Guardian Credit Union FCS Kickoff in Montgomery, Alabama, between Youngstown State and Samford.

Joining CBS and ESPN in recognizing the anniversary this year will be the ACC Network, the Big Ten Network, Fox, NBC, the Pac-12 Network, the SEC Network and Stadium, which have committed to featuring the CFB150 logo or providing original programming that highlights important moments in the game’s history.

As college football’s leaders reflect on where the game has gone, there is evidence that there is still room to grow. There are 775 schools at all levels offering football this season, with four fielding teams for the first time in 2019—Clarke University (Dubuque, Iowa), Franklin Pierce University (Rindge, New Hampshire), St. Thomas University (Miami Gardens, Florida) and Wheeling Jesuit University (Wheeling, West Virginia). Hatchell said the increase is a testament to how the game has evolved as well. “Everything that we do—whether it’s the training, the coaching, the players themselves—is so improved,” Hatchell said.

Nonetheless, persuading fans to show up at the games is a growing concern. The 46.9 million spectators who attended college football games last season marked a 1.3 percent decrease from the prior year. Of the Power Five conferences, only the Atlantic Coast Conference—with Clemson on its way to a national championship—showed an increase in average attendance last year. Overall, seven of the 10 FBS conferences saw a decrease in attendance for the fifth straight year.

“In-person attendance is a major concern for a lot of sports, not just football,” said Hatchell.  Among the challenges, he said, are improvements in the television production of games, which make staying at home attractive. “You don’t have to have an issue with restrooms or the cost of the things you want to eat or drink at a game,” he said. “You have to serve up a pretty good game to get people to go.”

As administrators address those concerns, they can take solace from the fact that the figure of almost 47 million fans among NCAA programs (FBS, FCS, Division II and Division III) who attended games last year still speaks to the popularity of the sport. And some programs are moving in the right direction. Northwestern made the biggest attendance jump of any program in the country last season, adding an average of more than 8,000 fans for each home game compared to the year before. Wildcats Coach Pat Fitzgerald addressed the issue during the Big Ten’s media day before the season.

“I think phones—technology—has been the (reason for) decline in attendance, No. 1,” Fitzgerald told the Big Ten media while holding up his phone. But his program has found ways to bring fans to the games, and other programs have plans to reverse the declines as well.

The game’s leaders have called audibles through 150 years to withstand past challenges. And as they celebrate how far the game has come, they remain hopeful that fans will embrace college football events for many more autumns to come.