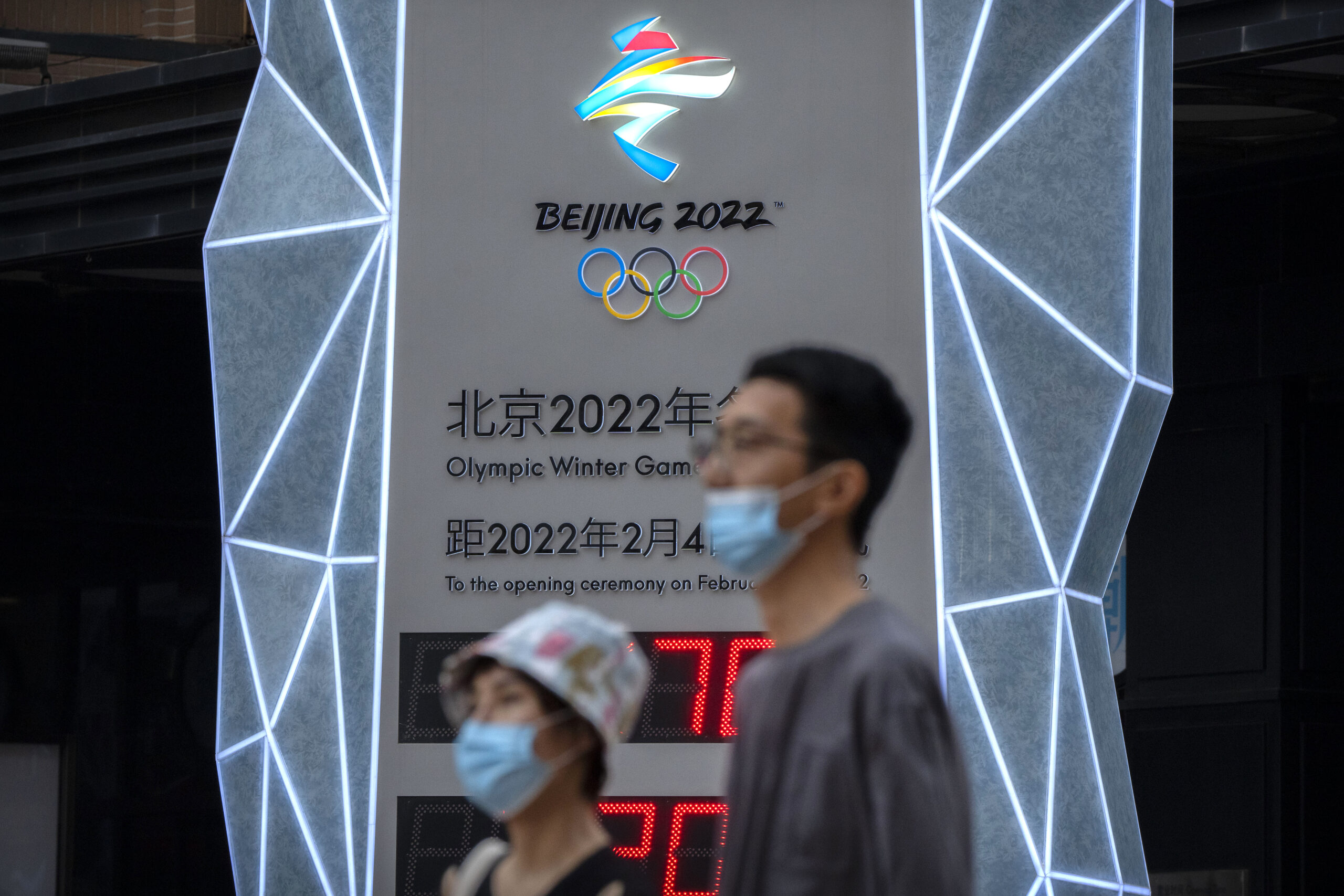 People wearing face masks to protect against COVID-19 walk past a display showing a countdown clock to the 2022 Winter Olympics in Beijing on August 18, 2021. Beijing's top official is reiterating the need for strict anti-coronavirus measures at the Winter Olympics. (AP Photo/Mark Schiefelbein)

Athletic competition itself was not the focus of a press conference by the United States Olympic and Paralympic Committee on Tuesday morning as questions focused on Beijing, the host of the upcoming 2022 Olympic Winter Games, and how the Games have become a flashpoint for the various geopolitical issues surrounding China.

“We encourage our athletes to support the values of Olympic movement, which include non-discrimination and equality for all,” USOPC Board of Directors Chair Susanne Lyons said. “We expect that China is going to be a unique situation to really allow sport to speak for unity and for global peace and the rights of people around the world.”

USOPC Chief Executive Officer Sarah Hirshland added there are no plans for security of the U.S. delegation above and beyond a typical Games. “We are a guest at their Games and we are under — and agreed to abide by — the rules of (the IOC and Organizing Committee). We are absolutely making sure athletes are knowing the rules and laws of the country that they are going to because they are different than the rules and laws in our country.”

“We know there’s still continued political tension,” Lyons said, noting the Olympic Truce was signed over the weekend in Athens during the torch lighting ceremony and “we’re trying to stay in our own lane where we can promote global peace and cooperation through sport.”

Throughout the 45-minute session, there were no questions about the vaccine mandate that the USOPC has implemented for its entire delegation to Beijing; anyone going to Beijing has to be fully vaccinated by November 1. Dr. Jonathan Finnoff, the U.S. Olympic and Paralympic Committee’s chief medical officer, said Monday a “very small minority” of athletes have objected to the mandate.

Lyons said the USOPC is expecting Beijing organizers to release the first version of the Olympic playbooks any day now and they “could have more stringent protocols than Tokyo.” Beijing organizers have already said the Winter Games will operate on a “closed loop,” with athletes, coaches, media and all other participants only allowed to go between venues and approved accommodations for the duration of the Olympics. China makes an exception for athletes to its proof-of-vaccination requirement to enter the country, but those granted exemptions are subject to a 21-day quarantine.

Finnoff also said Monday that U.S. athletes will have to fly charter to Beijing to comply with COVID-19 protocols implemented. Rick Adams, the USOPC’s chief of sport performance and NGB services, said the USOPC is waiting on the Beijing playbooks for clarity on the issue, noting almost half the U.S. team will arrive in Beijing from outside of the U.S. due to international pre-Olympic competitions. Logistics once in Beijing will also be a learning experience especially when it comes to COVID protocols and other security issues.

“One of the things we learned from Tokyo is things evolve over the course of the Olympic Games and Paralympic Games,” Adams said. “I don’t know that we expect there to be anything necessarily different other than to say we’re committed to making sure as we did in Tokyo that we learn each time, we understand who the decision makers are, we understand what best can be done not only behalf of the athletes, the athletes’ families, the athletes’ extended circles.”