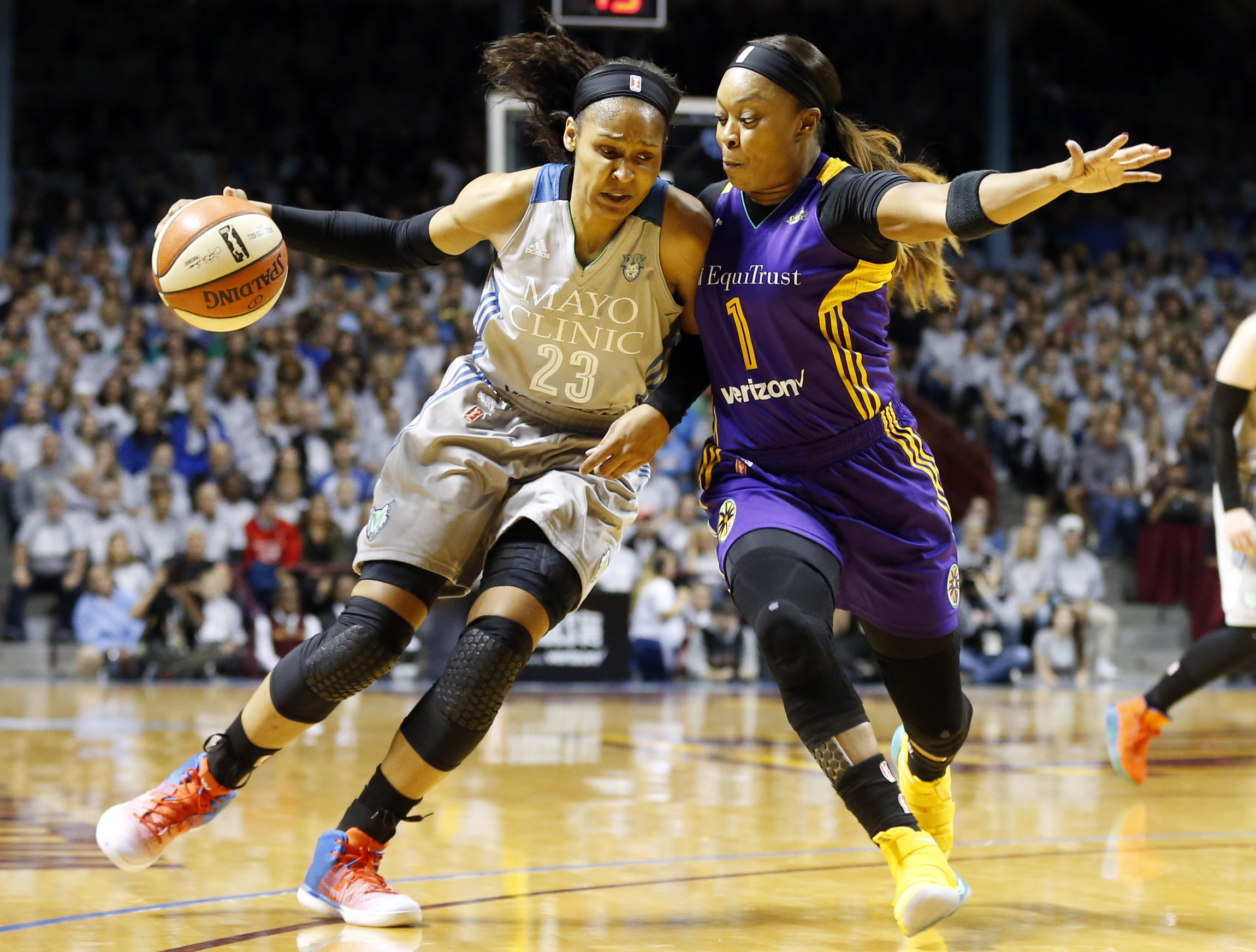 The WNBA has allowed sponsorships on its teams’ jerseys since 2009 and will soon expand the program. Photo courtesy of Jim Mone/AP Images

American fans of the Premier League, Bundesliga, La Liga and other international soccer leagues are familiar with the ubiquitous sponsor names splashed across players’ jerseys. The shirts worn by players in the 20 Premier League teams alone are worth an estimated $381 million in sponsorship money.

While it has yet to become a widespread trend among U.S. sports leagues, the tide is turning. Leagues such as Major League Soccer and the WNBA have allowed jersey sponsors for several years, while others are starting to experiment. Notably, starting this season, the NBA decided to allow teams to feature small sponsor patches on the left shoulder of their uniforms. The pilot program will run for three years.

The NBA’s experiment has resulted in some intriguing local partnerships. The Sacramento Kings, for instance, have partnered with Blue Diamond Almonds to showcase California growers and healthy living. Likewise, Disney patches are gracing the Orlando Magic’s uniforms, and Harley-Davidson teamed up  with its hometown team, the Milwaukee Bucks.

The Utah Jazz went a different route, using its first jersey patch to publicize 5 for the Fight, an anti-cancer charity, in partnership with Qualtrics, a software company based in Provo. Don Stirling, executive vice-president of Larry H. Miller Sports—co-owner of the Jazz—said the partnership arose out of talks with Qualtrics about naming rights for the team’s arena. The naming rights arrangement didn’t pan out, but the two sides were able to keep dialogue open, leading to the jersey sponsorship.

The path to the partnership itself has a touching back story. The idea for the patch came from Ryan Smith, the CEO of Qualtrics, whose father had been diagnosed with cancer in 2002. Smith moved back to Provo to spend time with his dad during treatment, and both decided they needed a project to work on.

“That project became Qualtrics—out of their basement,” Stirling said. Smith’s father was treated at the Huntsman Cancer Institute in Salt Lake City and is now in remission. Their shared business, meanwhile, took on a deeper meaning. “They said to themselves, ‘If this little research project ever sees the light of day, we’re going to do something to pay it forward and generate funds for cancer research,’” Stirling said.

Measuring about 2.5 inches square, the 5 for the Fight logos on the game jerseys urge people to give $5 for cancer research. The goal is to raise $50 million. During home games, fans at Vivint Smart Home Arena are encouraged to donate $5 by texting “Jazz” to 50555. The franchise plans to create an interactive wall on the arena’s main concourse that will feature photos of fans who have written names on their open palms  of friends or family members touched by cancer, Stirling said.

The WNBA got the jump on jersey sponsorships when the women’s league launched its marquee partnership program in 2009. Sponsor names appear across the chest of the jersey, and a new WNBA jersey patch will debut in the 2018 season on the upper left shoulder. “We certainly were aware of the European leagues and soccer really leading in that way,” said Jay Parry, COO of the WNBA. “As with any new offering, we wanted to make sure we considered all of the factors. When we introduced the marquee partnership in 2009 in the U.S., it was quite revolutionary.”

The WNBA’s sponsorship partners want their logos and marks to be as simple and readable as possible, Parry said, because when they get presented in a broadcast or on Twitter livestreams or Facebook, they want their brands to come across as a bold statement. The 2018 patches will measure 2.25 inches square, and teams and their partners work within general aesthetic guidelines set by the league. “We just devise the size and the location at the league level so that we have some consistency there, but it’s really working with the partner to find what works,” she said. The 2018 WNBA season will also see new on-court sponsor logos at the free throw lines.

The league’s sponsorship success, Parry said, lies in brands’ “interest in aligning with world-class professional athletes, because that gives them a way for their message and their brand to break through.” Prospective and current commercial partners believe the league is a great way to reach women, because 66 percent of game attendees are women, she added. There’s a real interest in the diverse aspect of the WNBA fan base, she said. Research shows that 63 percent of the fan base are minorities.

With its millennial fan base, e-sports might seem a natural fit for sponsorship experimentation. In November, the Dallas Fuel became the first team in the Overwatch League to snag a jersey sponsor, signing Jack in the Box to a three-year contract. The restaurant chain was named the official quick-service restaurant of the Dallas Fuel and its owner, e-sports organization Team Envy, in the new international 12-team league.

“All smart brands try to be where their customers are,” said Adrienne Horlick Ingoldt, marketing communications director at Jack in the Box. “In this instance, there’s a natural affiliation between gaming and late at night—which is what Jack in the Box does very well with our popular late-night menu and 24-hour availability.”

The NHL has also been experimenting. The league, its players association and International Ice Hockey Federation allowed a jersey sponsor for the eight teams that played in the World Cup of Hockey in 2016—a shoulder patch from SAP, a German software company.

NHL players had no issues with the patches, said Bill Daly, the league’s deputy commissioner and chief legal officer. Fans haven’t commented either positively or negatively, he said. “Having said that, I would point out that fans are very used to players having sponsorship patches on their international uniforms,” a common IIHF practice for non-Olympic competitions.

The NHL has discussed jersey sponsorship among various constituent groups within the league, Daly said, but time will tell if the idea holds. “I would say that we still aren’t at the stage where there is overwhelming support to go in that direction,” he said. “There is a feeling among many involved in the game that we have the most iconic jerseys in all of professional sports, and there is a reluctance by them to take or authorize any actions that might change or interfere with that perception.”